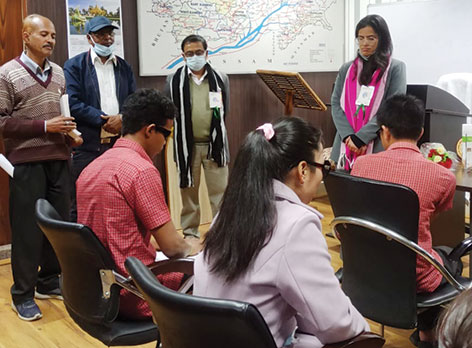 ITANAGAR, 5 Jan: The Donyi Polo Mission School for the Hearing and Visually Impaired in Chimpu celebrated World Braille Day with the visually impaired students of the school in a befitting manner on 4 January, followed by a sensitization programme on 5 January.

The school conducted its sensitization programme on Braille at Kendriya Vidyalaya -II, Itanagar for the students of classes XI and XII and made the students aware about Braille and other systems of special education meant for blind children for an inclusive society.

wherein Sudan interacted with the students and said, “We should encourage such children to identify and achieve their ambitions.”

The SJETA director opined that the visually impaired persons should be provided more accessible environment in the society, “for which we should issue instructions to various establishments like banks, post offices, secretariat, public offices of utility/ DC office, restaurants, bus stands/ railway stations, helipad and airport etc to update the systems/ information in Braille so that visually impaired persons may have better accessibility and lead their life in the society with respect and dignity.”

World Braille Day is observed in remembrance of Louis Braille, the inventor of the Braille script.

Braille, being a code of six dots, is the mode of reading and writing for persons with visual impairment (Blind & low vision). The dots represent various alphabets and numbers which are written in a Braille slate and can be read with the use of fingers.