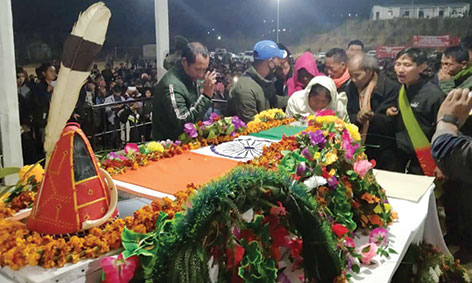 LONGDING, 6 Jan: Mortal remains of Rifleman Longdon Wangsu of 16 Assam Rifles, who was martyred in militants’ IED explosion in Manipur’s Thoubal district, reached his hometown here at 4 pm on Thursday.

His body was airlifted from Imphal and formally received by the 40th Assam Rifles based in Longding.

Meanwhile, thousands of public gathered at the general ground here to bid farewell to the martyred son of the soil.

His final rites with full military honour will be conducted at his native village Niausa on 7 January at 9.30 AM by the 40th Battalion of Assam Rifles.

Rifleman Longdon Wangsu of 16th Assam Rifles from Arunachal Pradesh was killed in the IED explosion which was carried out by militants in Thoubal district of Manipur on Wednesday. (DIPRO)