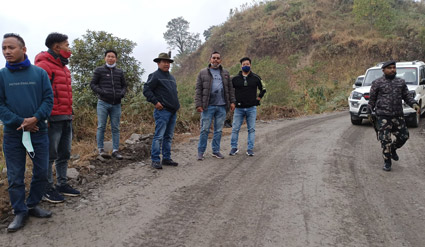 PONGCHAU, 13 Jan: RWD Minister Honchun Ngandam directed the department to start work on the Mintong-Khasa road in Longding district on a war footing, and directed the deputy commissioner to stop the plying of vehicles on the road to ensure its uninterrupted construction.

The minister, along with the DC, RWD officers and others on Wednesday inspected the road, which was earlier taken up for completion under ‘nano technology’, but was unsuccessful.

Speaking to the media, the minister said that, before he assumed the charge of the RWD, the department had taken up a few road projects in the state to be constructed under nano technology on an experimental basis.

“Our engineers were trained properly but the technology did not work properly for whatsoever reason. We are now taking up the construction work on a congenital basis,” he said.

The Mintong-Khasa road, measuring 30 kms, was earlier taken up by the rural works department under the PMGSY in 2017-18. The conventional method was taken up after the inspection made by the state quality coordinator and the deputy commissioner.