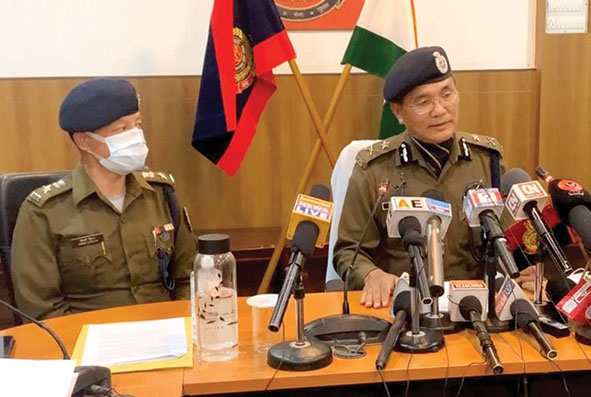 ITANAGAR, 14 Jan: The state police on Friday claimed that goons and antisocial elements were hired from outside the state to create law and order problems in the Itanagar Capital Region (ICR) and destabilize the state government during the 36-hour capital bandh enforced by the All Nyishi Youth Association (ANYA).

The ANYA had enforced the bandh in the ICR, demanding Chief Minister Pema Khandu’s resignation.

Addressing media persons just after the bandh hours ended, Inspector General of Police (Law & Order) Chukhu Apa said, “For the first time in the state, I have noticed hired goons and hired antisocial elements were being brought from outside state on payment to create mayhem and fear during bandh hours.”

“This is a dangerous trend. First time I have come across with such case. They were tasked by their handlers to create serious law and order problem, loot and fear in the twin capital cities during bandh hours to destabilize the state government. However, with the help of our intelligence inputs, we have arrested 12-13 outsiders,” the IGP said, adding that the accused have revealed what their mission was during interrogation.

Apa further informed that the capital bandh was designed to repeat the anti-PRC riots that had taken place in February 2019, resulting in the death of three persons and a trail of destruction.

The IGP further revealed that the handlers had offered money and other pecuniary gains in return for creating serious law and order situation in the ICR during the bandh. “The police have seized Rs 3 lakhs out of 10 lakhs which was allegedly given to the bandh callers by the handlers,” Apa stated.

He informed that catapults, daos and other items which were to be used during the bandh hours have been recovered.

“A deep conspiracy to create lawlessness, loss of lives, divide people of the state on communal lines by creating gross misinformation and communal clash was revealed during the investigation,” Apa said.

“The bandh callers had plans to target vital installations like important government buildings, communication infrastructure, including bridges, and target certain persons,” he informed.

The IGP also claimed that the detainees have confessed that they had brought illegal weapons to be used during the bandh. “The police are searching for probable sites and investigating the matter vigorously,” he said.

The IGP further informed that “ANYA leaders are still wanted by the police and lookout is still on.”

The police informed that at least 45 persons have been detained so far for violating the curfew, out of whom 31 have been sent to preventive detention and 14 have been released.

The police said that there was no loss of property or life during the bandh. They informed that they foiled an arson attempt at the food & civil supplies directorate in Papu Hill, Naharlagun. One adult and eight juveniles have been arrested in this connection, and an FIR (No 2/22 u/s 436 IPC read with 3 PDPP Act) was registered at the police station in Papu Hill.

On the suspension of internet service in the ICR during the bandh hours, the IGP clarified that it was done to prevent the bandh callers and antisocial elements from misusing the internet. He apologized to the people of the ICR for causing the inconvenience, and said that it had to be done as a preventive measure in the greater interest of the people.

“We determined to ensure safety and security of the people of the capital region as there were inputs that lethal weapons were being brought into the city. We regret that it caused inconvenience to the people,” he said.

Apa expressed appreciation for the people of Arunachal for their cooperation, and the security forces and the district administration for their dedication and sincerity in preventing any untoward incidents during the bandh hours.

“Close coordination and team work were the key during the bandh,” he said.

Meanwhile, ANYA president Byabang Joram claimed that the association stuck to peaceful democratic steps and did not resort to any violence.

Stating that the bandh was successful and effective, Joram claimed that the ANYA’s volunteers did not resort to any violence, and questioned the law enforcers why the volunteers were detained.

“We did not resort to any violence, nor damage any properties. We were maintaining peace after declaring bandh call. Why were our volunteers arrested?” Joram asked, claiming that the district administration and the police authority have unlawfully detained the ANYA volunteers.

“The police and administrators should be booked under unlawful act for misusing their power and damaging my vice president’s car at Yupia,” Joram demanded.

He went on to claim that “on 12 January intervening night, we were being continuously chased by the police and my general secretary was arrested. We were provoked to create law and order problem but we restrained and maintained our maturity.”

He demanded that all the detainees be released at the earliest, and said that the ANYA would be compelled to resort to a series of agitations if the detainees are not released.