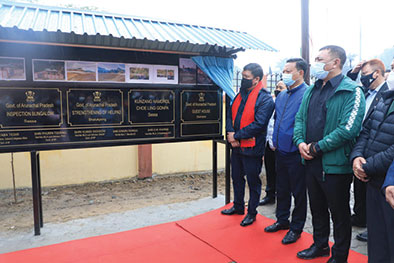 ITANAGAR, 15 Jan: “Every project has a timeline and the state government will ensure that every project is completed within its given timeframe,” said Chief Minister Pema Khandu after inaugurating 31 projects during his two-day visit to Thrizino-Buragaon assembly constituency in West Kameng district recently.

Addressing the public at various locations, Khandu informed that he is on tour to every district for the last three months to know the ground reality.

“Today, I have inaugurated 28 completed projects and laid the foundation for at least three projects,” said Khandu, adding that the projects have been completed only because of the cooperation of the locals and proper supervision by local MLA Kumsi Sidisow.

Speaking on the condition of the 17-km-long Palizi-Thrizino road, the CM informed: “The road has been taken up under the Chief Minister Comprehensive Road Scheme. The tender process is also completed, and plants and machinery are on the ground. Work will start soon.”

Sidisow informed that “an additional 16 infrastructure projects are yet to be inaugurated as some works are still going on.”

On the quality of work, Sidisow said, “Quality has been maintained in the entire project. We have strictly directed the executing agencies not to compromise with the quality.”

He assured to have the Palizi-Thrizino road project completed by 2024.

government higher secondary school, a circuit house and a PHC building in Thrizino; a school building in Subu; IBs in Bichom, Palizi, Khuppi, Jamiri, Wanghoo and Palatari; a general ground with a rostrum in Wanghoo; a secondary school building in Buragaon; the road from Jamiri (BCT road) to Buragaon (PMGSY); the road from Singchung to Tseringpam (PMGSY); water supply in Jamiri CO HQ and adjoining villages (NEC); augmentation of water supply in Buragaon EAC HQ (RIDF); augmentation of water supply in Palizi and adjoining villages (JJM); a tribal culture centre building in Wanghoo; a multipurpose irrigation-cum-water conservation project in Kaya valley; and others.