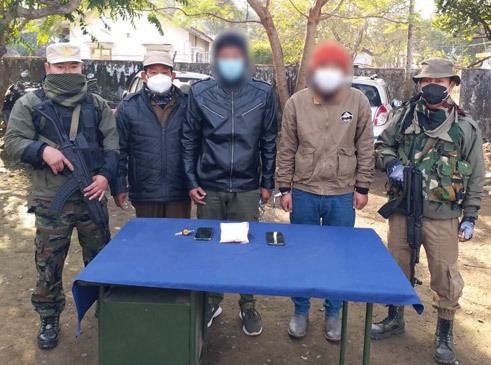 DEOMALI, 20 Jan: Two alleged drug peddlers, identified as Ngongdan Pungjung and Abo Wangsu, were arrested by the Deomali police on 18 January, and 12 gms of suspected brown sugar were seized from their possession.

Acting on a tip-off, a police team led by SIs Umeshan C and N Lowang, under the supervision of the Tirap SP, established a mobile police check post at Dirok in Mopaya village.

The police team intercepted the two men, who were riding an unregistered black motorcycle. During search, the police recovered 12 gms of suspected brown sugar in transparent plastic pouches from their possession, in the presence of the executive magistrate.

The police also seized the motorcycle and the duo’s mobile phones.

Both have been arrested, a case under the NDPS Act has been registered at the Deomali police station, and investigation is on. (DIPRO)