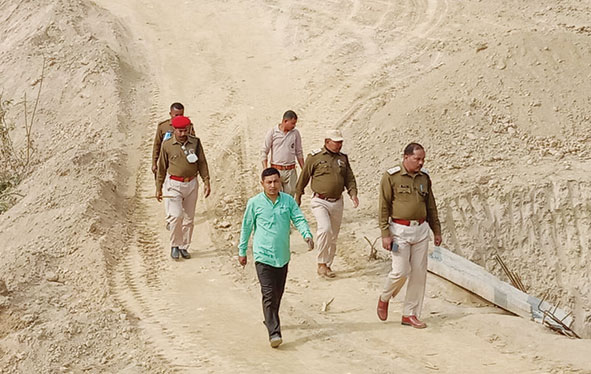 HIME, 25 Jan: In a brazen act of lawlessness, personnel of the Assam Police on Tuesday entered inside Arunachal’s territory here in Kangku circle of Lower Siang district and stopped the construction of the ongoing Likabali-Durpai PMGSY road project.

A team of the Assam Police, led by an inspector, came to Hime village at around 11:30 am and stopped the work. The police threatened the labourers and warned them against continuing the work.

The villagers who gathered in the area on hearing about the incident strongly protested the interference of the Assam Police inside Arunachal’s territory.

Even though the Assam Police personnel left when the villagers resisted their hooliganism, they warned that if the work resumes, they would come back and burn down the machines and the labour camps.

Speaking to this daily, Hime village gram panchayat chairperson (GPC) Kage Nada said that the people are living in fear due to constant harassment by Assam’s officials.

He claimed that work on several stretches of the road had to be abandoned due to constant disturbances by Assam’s police and forest officials.

“In villages like Champakchojo, Sogum and Masi, the culverts and bridges have been damaged by Assams’ officials. They have destroyed machines too. Contractors have stopped work, fearing for their lives,” he added.

The GPC further said that the people of Kangku circle are facing uncertainty. “The Likabali to Durpai road project is being taken up inside Arunachal territory. But Assam keeps on obstructing the work. They behave as if we are enemies. We are facing an uncertain future as Assam keeps on disturbing in our own homeland,” he said.

Nada also alleged that Assam’s officials harass the villagers without showing any legal documents. “When we ask them to produce legal documents for stopping work, they refuse to provide. Instead, they keep on threatening us. We are sick and tired of this bullying tactic of Assam. They are behaving like the Chinese,” said the GPC.

He appealed to the state government to immediately look into the matter.

“Due to lack of a road, Kangku circle once took part in the ‘No road, no vote’ protest. After much difficulty, this Likabali-Durpai road project was sanctioned. Now we are being denied our right to have a road connection. We fervently appeal to the state government to look into the matter urgently,” he said.

Meanwhile, on being contacted, Lower Siang DC Mito Riba said that he has asked the SP to submit a detailed report regarding the incident.