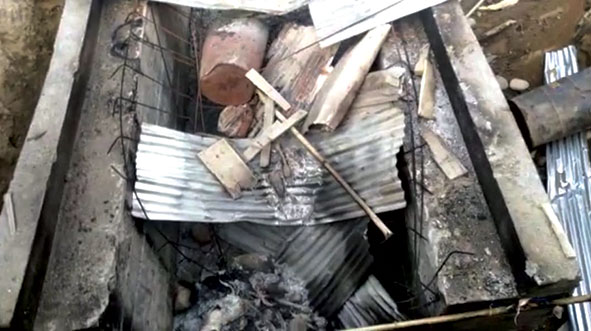 ITANAGAR, 27 Jan: Simmering tension continues to prevail along the Arunachal-Assam boundary at Hime village in Kangku circle of Lower Siang district after a mob of more than 50 people from Assam on Wednesday destroyed a labour camp and burnt down a motorcycle in Arunachal’s territory in the area to stop the construction of the Likabali-Durpai PMGSY road project.

The 65-km Libakali-Durpai road, being constructed by the RWD, passes through Hime village along the Arunachal-Assam boundary in the foothill area of Kangku circle.

Local sources claimed that dozens of people from Assam, allegedly led by one Sanjay Lakasu, of Bodoti village in Dhemaji district, came inside Arunachal’s territory and set ablaze the makeshift labour camp and burnt down a motorcycle belonging to a labourer, claiming that the area fell under Assam.

The broad daylight arson and intrusion triggered anger among the local residents, who rushed to the spot and resorted to firing in the air with SBL bore guns to chase away the arsonists.

“On 25 January, Assam Police personnel came inside Arunachal, directed the contractors and the villagers to halt the ongoing road work, claiming that the area falls under Assam,” said the head gaon burah of Hime.

“Yesterday, more than 50 people came, led by Sanjay Lakasu of Bodoti village in Assam, and set ablaze the labour camp and burnt down the motorcycle,” the HGB said.

On Thursday morning, the angry villagers of Hime confronted Assam Police personnel and officials who had come along with central paramilitary forces to the project site.

The incident occurred barely days after Chief Minister Pema Khandu and his Assam counterpart Himanta Biswa Sarma had a meeting in Guwahati to resolve the age-old vexed boundary issue.

On being contacted, Likabali ADC Gobi Nyickyor informed that the situation has been brought under control after the intervention of administrative level officers of both the states.

Nyickyor, along with Kangku CO Kalen Saroh and police personnel had a meeting with the Dhemaji (Assam) SDO at the spot on Thursday.

“Both sides have been directed to maintain the status quo to restore peace and tranquillity,” the ADC said.

He informed that the villagers have filed an FIR against the miscreants who assaulted the local resident coming from Itanagar. A community level meeting has been scheduled for Friday, the ADC said.

Meanwhile, the Galo Peoples’ Federation (GPF) has strongly condemned the vandalism and arson carried out in Hime village by the mob from Assam.

The GPF in a release on Thursday sought the state government’s early intervention to ensure hassle-free construction of the road and timely completion of the work.

“The state government should immediately talk with Assam counterpart, as the said project is nothing to do with Assam. Repeated disturbances from the people of Assam in said project is badly affecting the timely completion of the project,” it said.

Further, the Galo Students’ Union (GSU) submitted a memorandum to the home minister on Thursday, seeking the state government’s early intervention in the matter.

“The people of Kangku circle have been deprived of proper road communication since independence. The road, if completed on time, will bring visible changes in the lives of the people living in the 24 notified villages of the circle with a population crossing more than 4,000. Working season is very limited in our state with the months between November and March being the peak working season. Unnecessary obstruction at this stage from officials of the Assam government will be very much detrimental to the road project,” the GSU said.

The union urged the state government to immediately deploy security forces in Kangku circle, especially on the stretches of the road where construction work is underway.