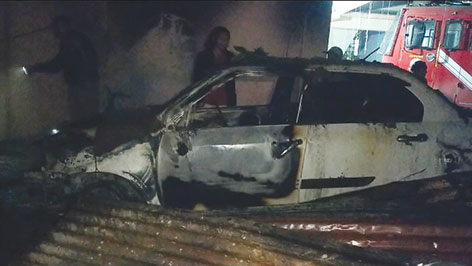 DOIMUKH, 30 Jan: A fire broke out at around 8:45 pm on Sunday at the residence of one Techi Teli (Sorma) of Amba village here.

The fire started from the traditional kitchen, which was not being used regularly, the house owner informed.

The first floor of the rented apartment, which is attached to the kitchen, was partially damaged, but the original documents of the tenant, a computer education student of RGU, were completely burnt.

A scooter parked near the kitchen was completely burnt, and a Swift Dezire car was also damaged.

The neighbours, along with those living in the apartment, came out and doused the flames.

Later, a fire tender from Naharlagun reached the spot.

The locals who witnessed the incident appealed for a fire station in Doimukh or Nirjuli.

There are only two fire stations in the capital region.