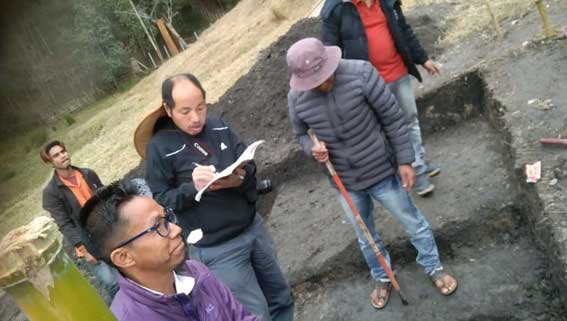 ZIRO, 6 Mar: A weeklong excavation work on the indigenous pottery making of the Apatani community concluded on 5 March.

A team comprising Pura Koji, Tadu Ringku and Kago Omo from the archaeology section of the state’s research directorate started its work on 27 February, in collaboration with the Pamu Yalang group of Bamin Michi, in Piichang Putu, Nami and Tanyang in Bamin Michi village here in Lower Subansiri district.

The tradition of pottery making in the Apatani culture is believed to have been practiced by the people of this twin villages only in the past. But after the advent of modern utensils, the art of pottery making faded away in due course of time and is long forgotten. This used to be a popular profession for some of the families of these villages seven decades ago.

The team found good numbers of evidence of pottery making. As per the experts, the unearthed materials consisted of terracotta coins, terracotta beads, many ornaments of traditional value, and a very good number of decorative as well as plain potshards of different shapes and sizes, which can be dated back to a couple of centuries.

In between the ongoing work, the site was visited by people of all walks and by students with their subject background. Diibo (South) ZPM Bamin Gumbo and a member of the Bamin Michi Welfare Association visited the site on the last day. (DIPRO)