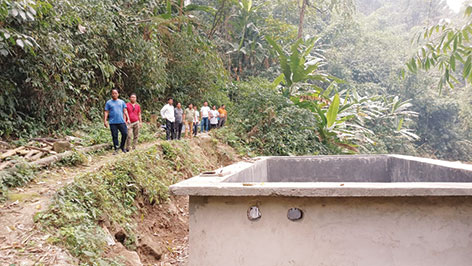 BORUM, 21 Mar: The Borum and Tarajuli Panchayat Welfare Association has threatened to disrupt the water supply to Naharlagun town from the Nyorch water source if the state government fails to fulfil its two-point demand within the next 15 days.

The villagers alleged that the project named ‘Augmentation of water supply to Buk, Borum, Tarajuli-I, -II, -III, Sood, Sood-II, Nyorch, and the railway station area’ has been affected due to failure on the part of the state government to release the fund on time.

Briefing the media, Borum resident Nabam Pekhi said that the civil work for the project is complete. “Civil work is complete but contractors have not been paid. This is causing a big problem. Also, the pipeline has not been laid till now,” said Pekhi.

He urged the state government to immediately pay the contractors and start laying the pipeline at the earliest. “We need proper water supply at the earliest. Right now, the majority of people are dependent on bore wells for water at home,” he added.

Pekhi further said that most of the contractors are local villagers. “As there is no road, we had to carry all materials by using manpower to the construction site. It was very difficult to execute the project. Department officials have visited the site,” he said.

Borum ZPM Tok Tama also urged the department to release the fund at the earliest and pay the contractors. “The civil work is complete and therefore contractors should be paid. The whole issue should be amicably resolved and no one should suffer,” he said.

Meanwhile, PHED EE Tadar Mangku clarified that the fund has already been placed and the contractors will be paid at the earliest.

“Rs 2 crore 71 lakhs has been allocated. It has gone for authorisation to the finance department. The chief engineer office staffers are following the file and, within the next few days, it should be cleared,” he said.

The EE informed also that the state government is taking the matter very seriously. “Right from concern minister to chief engineer PHED, this issue is being taken very seriously. In fact, it is due to the effort of the chief engineer that fund has been allocated. I appeal to people to cooperate with us and not to take any step which will harm the interest of the capital region,” Mangku said.

On the delay in laying the pipeline, he said that the department will procure pipes in this financial year.

“It might take another six months to complete pipeline work. The water source is around 8 kms from the road. The area is difficult to work,” he added.

The scheme was sanctioned in 2020. The project was initially hit by the Covid lockdown.