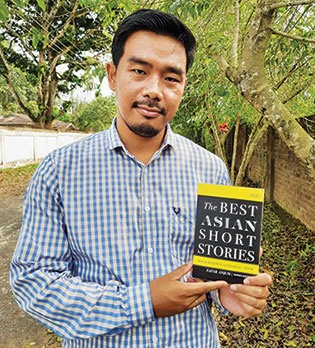 The fifth edition of The Best Asian Short Stories series for the year 2021 was released by publication house Kitaab Singapore recently and is available on Amazon.

“The editor of the book, Malachi Edwin Vethamani, and series editor Zafar Anjum selected Sumnyan’s short story ‘Local’ picked for the fifth edition along with 20 other writers of different countries,” the Arunachal Pradesh Literary Society (APLS) informed in a release.

Thirty-five-year-old Sumnyan is also the president of the APLS’ Tirap district unit, and has been associated with creative writing since his school days. His poetry collection book, Old Friends’ Parade, was shortlisted for the Satish Verma Young Writers’ Award 2015, organised by Muse India. His poems have been published in the journals Indian Literature and The Little Journal of Northeast India. He has also published short stories in various magazines.

APLS president Yeshe Dorjee Thongchi and general secretary Mukul Pathak in a press statement congratulated Sumnyan and expressed hope that “his success would lead many Arunachali writers to write in the coming days.”