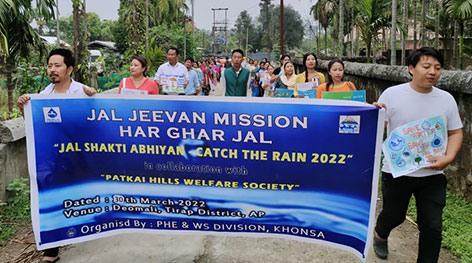 DEOMALI, 30 Mar: A mass rally under  the ‘Jal Shakti Abhiyan: Catch the rain water’ campaign  was organized by the  Khonsa PHE division, in collaboration with the Patkai Hills Welfare Society  here in  Tirap district on Wednesday.

A huge number of people, especially women from different villages and self-help groups took part in the rally.

Attending the programme, Soha block ZPM Sam said, “We are facing scarcity of water due to deforestation in large areas for traditional jhum cultivation, so we should spread awareness to stop deforestation, and instead plant more trees.”

Speaking on the occasion, Deomali block ZPM Wangphoon Lowang stressed on stopping shifting cultivation, especially near the catchment area and  to find an alternate way of cultivation to save ‘our belt’ from scarcity of water. Lowang appealed to all to adopt cash-crop cultivation instead of the existing traditional way of shifting cultivation with the help of the agriculture and horticulture departments for sustainable livelihood.

More than 300 tree saplings were distributed to all the participants to mark the Jal Shakti Abhiyan. (DIPRO)