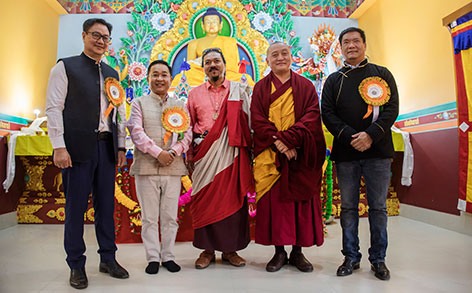 Speaking at the function, Khandu welcomed his Sikkim counterpart and expressed gratitude for his presence along with a delegation comprising Sikkim’s legislative assembly speaker, ministers, MLAs, officials, and cultural teams.

“The culture of our state has evolved with continued interaction and exchange with the entire Northeast region. In this context, considering the long historical relationship between Sikkim and Arunachal Pradesh, it is fitting that we strengthen this bond by increasing the exchange of ideas and the rich culture and traditions that both our states share,” Khandu said.

Stating that Arunachal has witnessed a sea change in the last few decades in terms of both material and human resource development, Khandu emphasised the need to strengthen the bond between the northeastern states on issues like preservation of ecosystem, cultural trade, tourism, and harnessing of human capital.

“To bring about ‘mountain perspective’ in the national and sub-national planning and policymaking, we hope to collaborate with the government of Sikkim to address our common developmental issues and ensure mutual prosperity in our states,” he offered.

Khandu said that the Northeast has witnessed rapid acceleration in overall growth since Prime Minister Narendra Modi took over the helm of affairs.

“Northeast today consists of seven sisters and one brother, Sikkim. We as a family are now complete,” he said.

Khandu enumerated several sectors in which Arunachal can learn from Sikkim, including tourism, organic farming, education and health, and expressed optimism that the Sikkim government would collaborate with Arunachal and move forward on a path of sustainable and mutual development.

He said both Sikkim and Arunachal hold promises in the agriculture, horticulture, hydropower and sports sectors.

“We are accelerating our efforts to reach the full potential in these sectors. We believe that with common efforts, shared knowledge and active cooperation between the two states, we can bring prosperity and happiness to our two states,” he said.

The next such programme will be organised in Shi-Yomi district, Khandu announced, and requested the Sikkim government to “reciprocate by organising cultural exchange events in Sikkim too in the near future.”

The cultural exchange programme was marked by performances by various cultural troupes from across Arunachal, Sikkim, and neighbouring country Bhutan. (CM’s PR Cell)