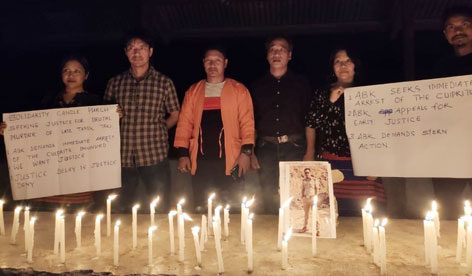 PASIGHAT, 11 May: The Adi Baane Kebang in a statement on Wednesday, appealed to the home ministry, government of Aruna-chal Pradesh to ensure early arrest of the murderer(s) of late Tamik Taki.

An Inspector with tax & excise dept, Taki who had reportedly gone missing from Itanagar on 22 April, was found dead in the Siang river near Jido village in Upper Siang district.

ABK has termed the killing of Taki as cold blooded murder and demanded for early arrest of the murderer(s).

“We have never seen such cold blooded murder and such murderer(s) should be given exemplary punishment as per law,” said Jobomchang Mengu,  spokesperson ABK and Joluk Minung, president  ABK youth wing.

Taki, a permanent resident of Komsing village, was residing in RWD Colony, Itanagar.

Reportedly, he had last contacted his wife through his mobile phone on 24 April, and since then his phone had been switched off.

‘A missing person report was filed at the Itanagar police station on 28 April,’ a relative of the deceased said.

A case has been registered under Section 302 of the IPC at the Tuting police station after identifying the body on Saturday and investigation is underway, said officer-in-charge Tuting PS, Pema Jamsten on Wednesday.

Adi-Mising Porin Kebang and several other Mising organizations on Wednesday, took out a candle light procession from Assam’s Jonai to Ruksin town and back, demanding justice for late Tamik Taki, whose body was found in Siang river in Tuting circle in Upper Siang district on Friday last.

The protesters appealed to the Arunachal Pradesh government to conduct a high level inquiry into the case and bring the culprit(s) involved in it to book.