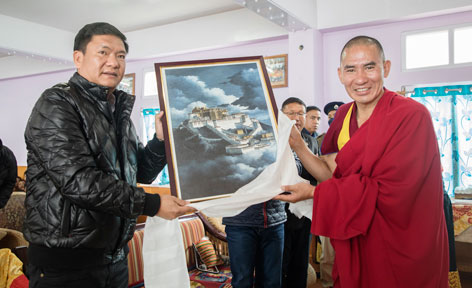 Founded by Padma Shri awardee Lama Thupten Phuntsok, Manjushree Vidyapeeth has been offering formal education to children who have lost their parents or are too poor to afford schooling, since 1998.

The clinic will cater to the healthcare needs of the children of the institute.

Speaking on the occasion, Khandu recalled the initial stages of the institute’s establishment, and said, “Since the beginning, I have been personally associated with the institute. I have witnessed its difficult initial days and its success in tackling all hurdles to emerge as one of the best educational institutes in the district.”

Khandu also recalled the help provided by the Indian Army “in terms of men and machineries in land development for the institute’s foundations.”

On behalf of the people of Arunachal Pradesh, he extended gratitude to philanthropist Jeff Keplan and US-based Deerfield Partnership Foundation and “friends of Manjushree Vidyapeeth” for sponsoring the health clinic. He expressed appreciation for the district administration, the district health authority and the Indian Army posted in the region for helping to make the clinic functional.

Speaking about the education sector, Khandu said that, despite being a late starter, Arunachal is making rapid strides today. He informed that the state government spent about Rs 1,300 crores in developing infrastructure of government schools across the state during the last financial year.

“More funds have been kept for the same this year,” he informed.

Terming the National Education Policy adopted by the central government “one of the greatest reforms in education sector,” Khandu said that the state government is committed to implement it in phases in all government schools of the state by 2030.

“Our youths are very talented. They have excelled in all sectors like sports, games, performing arts, music, etc. We are focusing to provide sufficient platforms to our youths to explore, expose and excel in their chosen fields,” he said, and informed that the state government is sponsoring events like Miss Arunachal, Mr Arunachal, Arunachal Idol and Arunachal’s Got Talent.

He proposed that the district administration and the local officers and leaders start a coaching centre in Tawang, “so that local youths who cannot afford to go outside the state or to the state capital can prepare for competitive examinations held by the UPSC and the APPSC.”

He gave assurance that all three MLAs of the district would contribute from their MLALAD funds for the purpose.

To a request by Lama Phuntsok, Khandu assured to sanction funds for the construction of a multipurpose auditorium at the school within this financial year.

Growing in strength with each year, the school today has more than 300 students. (CM’s PR Cell)