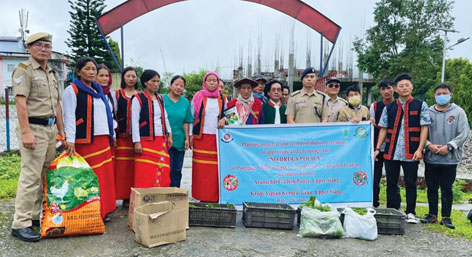 PONGGING, 20 Jun: Pongging in Upper Siang has become the first village in the district to willingly adopt a ‘no drug policy’, and to shun their dependence on opium and cannabis cultivation.

Pongging was one of the major growers of the two crops traditionally. This year, the villagers took the decision to stop such cultivation and to cooperate with the police in nabbing and arresting whoever is found consuming or selling any type of contraband substance, informed SP Jummar Basar.

“This was a time-taking and difficult process, which was possible through regular counselling and interactions through Pongging Students’ Union, registration of case under NDPS Act and arrest of opium/marijuana users and peddlers and time to time village visits and awareness programmes,” he said.

Basar acknowledged the role played by the Pongging Students’ Union, Pasighat-based Women Against Social Evils, and the district unit of the APWWS.

“Further, our endeavour and intention is to set this as an example and slowly wean off a few other villages in the district from their dependence on such cultivation and make Upper Siang district free of illegal cultivation of opium and cannabis,” the SP said.

Meanwhile, the Upper Siang police, in collaboration with the Krishi Vigyan Kendra, led by its Head Dr Oyinti Megu, distributed seedlings and seeds to the villagers as a mark of appreciation and encouragement, and to show them a legal and sustainable way of uplifting their economy through alternative horticultural cash crops instead of growing opium and cannabis.