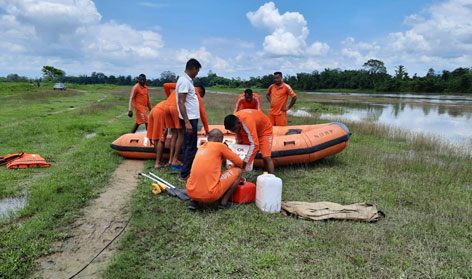 BORDUMSA, 21 Jun: A boat carrying a car, a motorcycle, and a few passengers capsized at Wagun Ghat here in Changlang district on Tuesday.

At the time of the incident, the boat was crossing the Burhi Dehing river near the Assam-Arunachal boundary.

As per a report, the owner of the car, identified as 54-year-old Kiran Thapa, is still missing, even though his car has been retrieved.

Thapa is a resident of Wagunpathar-4 here. The NDRF has reached the site and is making efforts to locate the body.

Speaking to this daily, Changlang DC Sunny K Singh informed that efforts are on to locate the missing person, and that the NDRF team and the local administration are working together in this regard.

“It was an unfortunate incident. I have constituted a committee to verify the reasons along with recommendations to avoid similar accidents in future,” said the DC, adding that, once the report of the committee is received, the administration would be able to tell the exact cause of the incident.

However, according to local sources, the incident reportedly took place after the person mistakenly accelerated his vehicle instead of applying the brake.

“The owner of the car, Kiran Thapa, was inside while ferrying his car. After the boat capsized, his i10 car, along with a motorcycle, fell into the water of the Burhi Dehing river,” an eyewitness said.

He also alleged that, even though the incident was immediately reported to the local authorities, help came very late. “First of all, the machine boat that is used to cross the Burhi Dehing river is 10 years old. The authorities need to look into this issue seriously. Secondly, the rescue team arrived very late,” said the local eyewitness.

At the time of filing this report, search operation was continuing in and around Wagun Ghat.