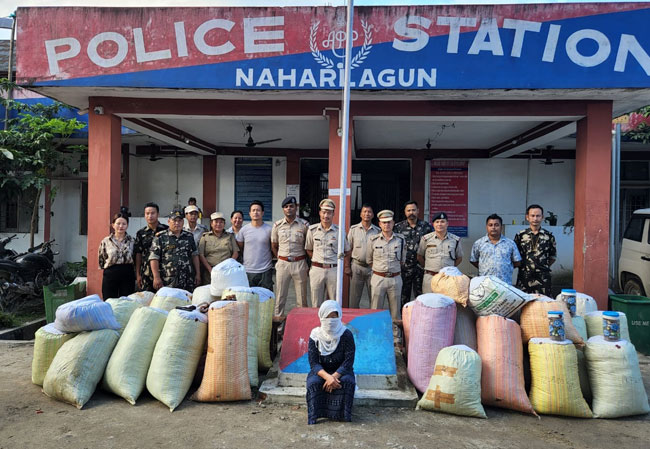 ITANAGAR, 25 Jun: In a major drug haul, the Naharlagun police seized cannabis (ganja) worth over Rs 50 lakhs from a house in Naharlagun, and arrested a woman, the capital police said on Saturday.

On receipt of intelligence inputs about the involvement of a couple in supplying narcotics in the ICR, a special team of police was constituted by the capital police and a raid was conducted in the couple’s house in Gollonallah area in Naharlagun on Friday evening, ICR SP Jimmy Chiram told reporters here.

During the search, the police team found 525.97 kgs of ganja hidden in the house, the SP said.

The team also seized one .32 pistol, besides Rs 50,000 in cash. The police seized the materials along with an SUV vehicle, suspected to have been bought with proceeds from the drug trade, Chiram said.

While the husband, Tadar Chada, is absconding, his wife, Tadar Kampung, has been arrested.

Kampung had been arrested by the Naharlagun police in July last year under the NDPS Act, and was out on bail.

The police said that Kampung is being evasive and uncooperative but it is suspected that she procured the cannabis from Sagalee, Mengio and Kalaktang, and stored it in a hidden godown, before selling it to retailers and wholesalers, “as per the surveillance reports.”

Efforts are on to establish the source of the drug and to identify and arrest all the peddlers and buyers associated with Tadar Kampung and Tadar Chada, the police said.

A case has been registered at the Naharlagun police station. (With inputs from ATNS & PTI)