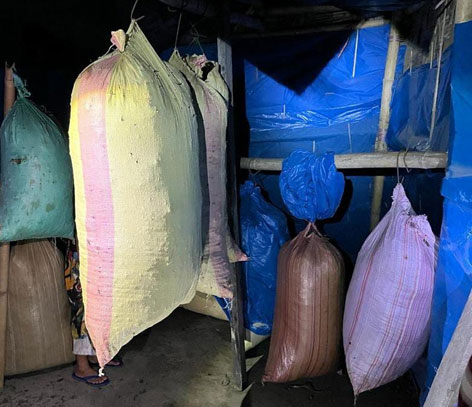 ITANAGAR, 27 Jun: Following the seizure of 525.97 kgs of cannabis (ganja), worth over Rs 50 lakhs, from a house in Naharlagun, and the arrest of one Tadar Kampung last Saturday, the Naharlagun police, along with the Nirjuli police, on Sunday seized another 195.67 kgs of suspected cannabis from a secret godown in Lekhi village.

Based on interrogation of the arrested person, a raid was conducted on Sunday night, during which another secret godown of accused Tadar Kampung and her husband Tadar Chada was busted by a police team led by the Naharlagun SDPO and Executive Magistrate Laxmi Dodum.

According to a release from the capital police, the team found the godown in the kutcha house of one Nabam Paul in Lekhi village, near the bank of the Dikrong river.

During the search, one person was arrested and 12 gunny bags full of suspected cannabis, weighing around 195.67 kgs, were seized.

As per reports, the cannabis was transported from Mengio in Papum Pare district.

“With this, the total quantity of suspected cannabis has reached 721 kgs, with an approximate market value of Rs 72 lakhs. Efforts are being made to apprehend the absconding accused,” the release added.