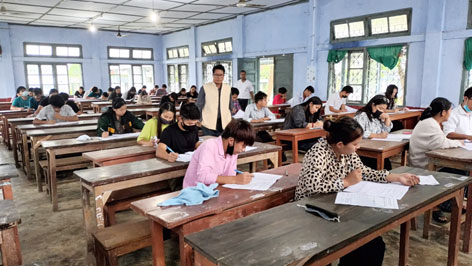 The RGUPET for admission to a total of 123 PhD vacant seats in 28 departments will be conducted in the RGU campus only. It is scheduled to be held from 4 to 7 July.

RGU Joint Registrar Dr David Pertin informed that 15,806 candidates have been shortlisted to appear for the exams, “which is a very encouraging sign for the university and speaks volume of RGU’s popularity in the state and in the region.”

He informed that “candidates who are appearing in the final semester/year examinations of any qualifying degrees are eligible to apply and sit for the RGUPET and RGUCET-2022.”

A 15-member Central Coordination Committee for Common Entrance Tests, led by Geography Professor SK Patnaik, has been constituted. “A 24/7 helpline is also in place to attend to the queries of applicants,” Dr Pertin said.

The final admissions will be completed latest by 23 August, and the classes will commence from 24 August.

RGUPET and RGUCET Central Coordination Committee Chairman Prof SK Patnaik informed that “the first day of the RGUCET started off well at 82:34 percent.”

He said that “5,364 candidates are competing for admission to 1,100 BEd seats spread in RGU’s education department and 10 affiliated teacher education colleges of the state.”

RGU Vice Chancellor Prof Saket Kushwaha said that “RGU is striving to be amongst the top performing universities of the nation.” He said that “this year, it may be the last year when RGU as a central university will be conducting the common entrance test for the last time, as the university is all set to join the CUET conducted by the National Testing Agency in line with the undergraduate courses.”

Registrar Dr NT Rikam informed that “RGU ranks among the top 150 universities amongst a thousand plus universities in India by the National Institutional Ranking Framework of MoE, and has all the potentialities despite its locational remoteness and bottlenecks.”