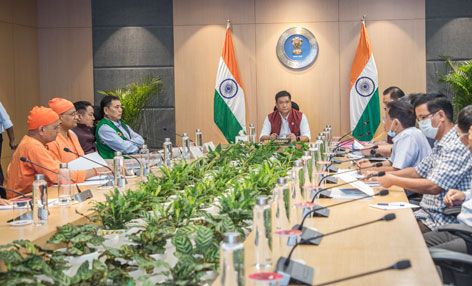 Cancer screening project to be launched

Chairing a meeting of the State Cancer Society (SCS) here, the CM also said that “there is a need to bring about behavioural and lifestyle changes for prevention of cancer.”

In view of the high incidences of cancer, Khandu requested the SCS and the health department to “take initiative under the leadership of Health Minister Alo Libang.”

Principal Health Secretary Dr Sharat Chauhan informed about the increasing incidences of cancer in the state, and highlighted the aims and objectives of the SCS, “which is mainly to oversee comprehensive cancer treatment, including pain and palliative care support, create awareness and to set up cancer care centres under central and state government schemes.”

He informed that “3,232 patients have benefitted from the Chief Minister’s Free Cancer Chemotherapy Scheme so far.” The scheme was launched in 2017 to provide chemotherapy medicines up to a ceiling of Rs 5 lakhs per patient per annum to all APST cancer patients and regular state government employees and their dependants.

Dr Tsering further informed that the MoU with the Tata Memorial Centre, Mumbai “shall be renewed for the CM’s Free Cancer Chemotherapy Scheme for another term of three years.”

He said also that a cancer screening project will be launched in Papum Pare, the ICR, East Siang, and Tirap districts soon.

“Also, the state government has increased the allocation from the initial Rs 3 crore to Rs 6 crore for the scheme in this financial year,” he said.

It was decided during the meeting to establish a state-of-the-art comprehensive tertiary cancer care centre for the people in a phased manner. This will be in addition to the free diagnostics, chemotherapy and medicines being provided by the government.