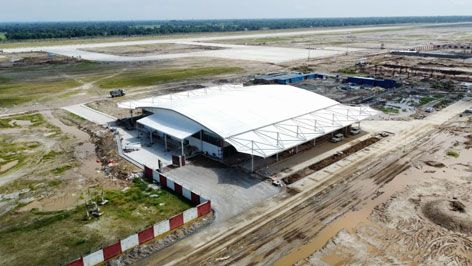 ITANAGAR, 9 Aug: Palpable excitement over inauguration and operationalisation of Donyi-Polo Airport Itanagar (Hollongi) has been hit by technical glitches as the inauguration may have to be postponed to October and November. The flight services were supposed to start by 15 August.

Sources in the government disclosed that getting the airport licensing from the Directorate General of Civil Aviation (DGCA) is being delayed due to concerns over safety measures.

A government source informed this daily that “Flight services from Donyi Polo airport might not start by 15th August because of delay in getting the licence from the DGCA. But flight will start as soon as safety measures are in place.” However, the sources did not specify the technical aspects which has led to delay in license issuance.

There is a speculation that Prime Minister Narendra Modi would inaugurate the airport once it is ready for operation.

The Civil Aviation (CA) department issued a statement on Monday stating that as per target, the major civil constructions have been achieved. Airports Authority of India (AAI) has completed the package-I (runway and pavements works) and package-II construction of interim terminal building. The CA further stated that as per the standard guidelines, AAI has organized various regulatory authority inspections and has successfully conducted flight calibrations and test landing of aircraft from 19 to 20 July and inspection on 27 July by DGCA director general followed by Bureau of Civil Aviation Security.

“It is being ensured that airport will be ready for operations with all the safety measures in place,” CA stated.

The department further disclosed that the government has approached Airline Operators for introduction of scheduled commercial flights from Donyi Polo Airport Itanagar to the rest of the country at the earliest.