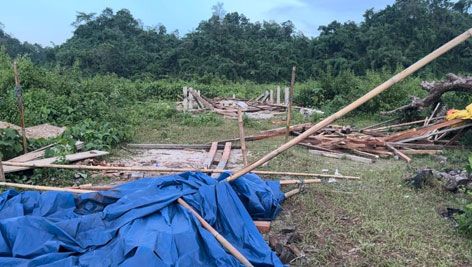 TARASSO, 9 Aug: The Assam officials carried out eviction at Dullung Ramghat under Tarasso circle of Papum Pare district on Sunday. A half constructed house of one Tana Tulang was evicted by the Assam officials. The area where eviction took place is reported to be around 3 kms inside Arunachal on the other side of the Dullung River.

The Assam officials had carried out eviction at the same place last year also.

While talking to this daily, a senior official of Papum Pare district said Assam officials should have given time to the Papum Pare administration to look into the case. “They should have given us enough time to take action in this regard. There should be better coordination between officials of two states to deal with this kind of situation,” the official added.

The latest development comes just days after Arunachal Pradesh and Assam signed a declaration to work towards a permanent settlement of their decades-old interstate boundary disputes by signing the ‘Namsai Declaration.’

The declaration was signed on 16 July after the chief ministers of both the states – Pema Khandu and Himanta Biswa Sarma – held a crucial meeting with the cabinet ministers of the two states in Namsai town. As per the declaration, both the states intended to restrict or minimise the boundary disputes between the two states in respect of 123 villages placed before the Local Commission by Arunachal in 2007. The two CMs agreed in principle to restrict the number of disputed villages to 86 from 123.

Tarasso is a highly sensitive boundary area. The region witnesses constant inter-state boundary disputes between Assam and Arunachal Pradesh. In January 2014, many people lost lives at Tarasso over the boundary dispute.