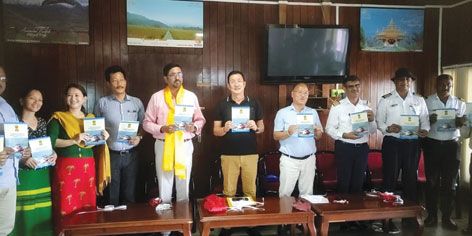 ITANAGAR, 19 Aug: Three airlines have submitted their proposal to the state govt. for flight services from Donyi-Polo Airport in Hollongi. The civil aviation minister Nakap Nalo informed on Wednesday that negotiations are on with the three airlines and flights are likely to start from October. He did not give the names of the airlines.

Earlier, it was scheduled for Aug 15 but DGCA is yet to give its clearance due to safety reasons.

The minister said that the govt. is looking at connecting the state with Delhi as its first priority.

The manual details on the flight timings, seating capacities and other details.

While appreciating the contribution of helicopter services here in the state, Nalo recalled that the state’s first Helicopter service-Vayudoot was introduced way back in 20 January 1981, as a joint venture of Air India and Indian Airlines.

Currently, the state has three operating commercial helicopter services- Sky One Airways Private Limited 1 and 2 along with Global Vectra Helicorp. There are also other helicopter services for emergency cases and disasters on standby.

Civil aviation director T Messar, civil aviation assistant director Miranda Pertin along with the officials and the crew members of the helicopter services were present at the launch in Naharlagun helipad.