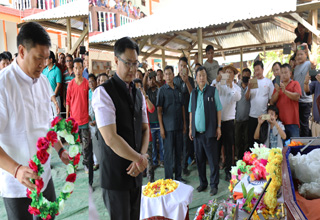 ITANAGAR, Sep 6: The mortal remains of Health and Family Welfare Minister, Jomde Kena was laid to rest with full state honour at his hometown Gensi in West Siang district on Wednesday.
Thousands thronged the residence of Kena to pay their last respect to the departed leader.
Chief Minister Pema Khandu cut short his Delhi visit and air-dashed to Gensi along with MoS for Home Kiren Rijiju and state BJP President Tapir Gao to bid adieu to his cabinet colleague.
Pema remembered Kena as one of the most down-to earth persons, who always had a smile playing whatever may be the situation.
“As a minister and as elected representative of Likabali Assembly Constituency, Kena did a lot. He would have done more for the welfare and development of his constituency and the state, if not his life was cut short. I assure you all his visions and dreams for his people and the state will be fulfilled. That’s the best tribute we can give to him,” the Chief Minister said.
He requested the people of the constituency and late Kena’s family members not to feel ‘orphaned’. He said the entire Cabinet and legislators are with them and they will not let the late leader’s absence be felt.
Rijiju also remembered Kena as a trustworthy, energetic and ever-smiling friend. The union minister recalled his many interactions with the late leader in the earlier years of his political career.
Like Pema, Rijiju too assured that all dreams and visions of the departed leader will be fulfilled.
State BJP President Tapir Gao, who shared a great rapport with Kena, narrated various interactions and incidences with him. Gao broke down while recalling his last conversation with Kena over phone.
Those who joined the last rites included Deputy Speaker Tumke Bagra, Home Minister Kumar Waii, Education Minister Honchun Ngandam, PR & RD Minister Alo Libang, Veterinary & Animal Husbandry Minister Dr Mohesh Chai, Parliamentary Secretaries Pakgna Bage, Likha Saaya, Nyamar Karbak and Zingnu Namchoom, MLAs Gojen Gadi and Jarkar Gamlin, Lok Sabha East MP Ninong Ering, former Chief Minister Gegong Apang, West Siang deputy commissioner and SP and others.
Born on 31 December, 1967 at Taramori village under Gensi circle, Kena lost his father at the age of six but pursued his studies, besides taking up business at a very young age. He ventured into active politics by contesting for anchal samiti member and winning it. He went on to become a ZPM during 1992-97.
He contested election for the first time as an independent candidate in 1999 but faced defeat. He re-contested in 2004 again as an independent and won comfortably. Since then he never looked back. He won the 2009 elections on INC ticket and became Parliamentary Secretary (IT, Science & Technology) and subsequently got elevated to Deputy Speaker.
After the 2014 elections, he became Parliamentary Secretary Transport, Land Management, Civil Aviation and Cooperation and later became Minister Transport. In 2016, after Pema Khandu became the Chief Minister, late Kena was inducted as the Health & Family Welfare Minister. He held the post till his dying days.
Late Kena is survived by his wife Dajum Nada Kena, four daughters and two sons.
Further, the Arunachal Pradesh unit of Bharatiya Janata Party (BJP) deeply mourned the untimely demise of Kena on September 4.
The party rank and file in a condolence meeting here on Wednesday observed two minutes silence as a mark of respect to the departed leader.
“Kena was a dynamic young leader, who always worked for the welfare and development of down trodden people of his constituency and the state as a whole. He was very cooperative and possessed a very amiable character,” the party said.
Parliamentary Secretary for Environment and Forest, Chow Tewa Mein has also expressed sadness over the passing away of his long term colleague, Health Minister Jomde Kena and termed his death as a personal loss. Expressing his deep sympathy to the family members of late Kena, the Parliamentary Secretary prayed for peace of the departed soul.
The Galo Indigenous Faith & Cultural Council, Adi-Galo Indigenous Culture and Training Forum and the Nyishi Elite Society have deeply mourned the demise of Kena and described his death as a great loss for the state.
The organisations prayed to the Almighty to give the family courage and strength to bear the irreparable loss.
The staff and management of KBM Hospital, and doctors and staff of Heema Hospital, Itanagar also observed a moment of silence as a mark of respect to late Kena.