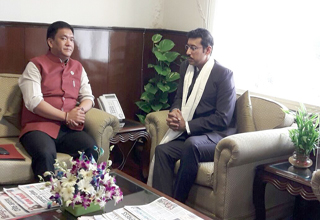 NEW DELHI, Sep 12: Chief Minister Pema Khandu on Tuesday met newly appointed Union Minister of State (I/c Charge) for Youth Affairs & Sports and MoS (Information & Broadcasting) Colonel Rajyavardhan Singh Rathore at the Shastri Bhawan and called for integrated approach to augment sports infrastructure in the state.
The Union Minister endorsed the need to encourage adventure sports in the state given the picturesque locales and the experience that the landscape of the state has to offer. He suggested the state government to formulate proposals for adventure sports under the schemes of the Ministry of Youth Affairs, Sports and DoNER.
Pema emphasised for the need of a multi sports stadium at Itanagar and residential academy in the state considering the huge untapped potential and natural talent for sports activities amongst the locals in the state.
“Multi Sports Stadium and residential academy if considered by the ministry will change the face of sports in the state” Pema emphatically said.
The Union Minister while assuring all possible support has asked the state government to formulate projects with integrated concept for consideration of the ministry.
He also suggested for conducting a visit by state officials to Gopichand’s academy in Hyderabad which has integrated complex housing both training/sports area and residential facility for the players.
Secretary (Sports) informed that ‘Khelo India’ scheme offers ample scope for setting up of sports infrastructure in the state. The Ministry considers a maximum of two projects in a single location of Rs 8 crore each. He suggested the state government to propose new projects within the contours of this scheme. The request made by the CM for ‘Rural Hunt’ by SAI to tap the unexplored sports potential in Arunachal Pradesh was readily agreed to by the Ministry.
The Ministry suggested exploring the possibility of gap funding for five ongoing stadiums (under erstwhile special plan assistance by Government of India) through the Ministry of DoNER under its non-lapsable pool.
Rathore, on the request of Pema for inclusion of Singpho dialect in AIR broadcast from Itanagar, suggested availing the scheme of Community Radio Stations (CRS) of Ministry of Information & Broadcasting, which will broaden the outreach in local dialect/language within the vicinity of the CRS location.
“The Ministry will be funding 90 percent of the cost of setting up of CRS in the North Eastern Region,” the Minister informed.
Secretary Sports, Government of India Injeti Srinivas was also present in the meeting.