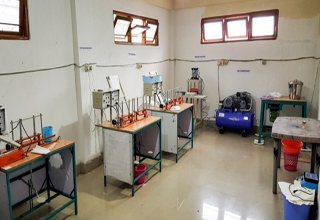 TAWANG, Sep 27: In an effort to train, skill and generate employment to educated unemployed women of Tawang block, a pilot-project ‘Sanitary Napkin Making Machine Project’ was installed and necessary training provided to trainees in the last 10 days.
Priced approximately at around Rs 5 lakh and technically called the ‘De-Fiberation Machine’, it is a micro-scale Industrial machine procured from Coimbatore and consisting of weighing machine, grinder, compressor machine, pressing machine, touch sealing machine, hand sealing machine and UV-Ray sanitizer machine. The main raw materials consist of wood pulp and compressed cotton, among others.
The machine has a capacity to produce 1000 sanitary napkins in eight hours and its running cost is Rs 350 to Rs 500 per hour.
Manpower necessary for the machine along with marketing section ranges from 10 to 20 depending upon production rate.
The significant features of the product are that the napkin is bio-degradable, environmental friendly, no side effects and has more absorption capacity than the commercial napkins available in the market.
The biggest advantage of the napkin is that it will be available at much cheaper rates than the commercial ones while generating reasonable source of income to the employees.
Rural womenfolk would be the biggest benefactors of this machine-made but locally produced napkin.
Third of its kind to be launched in the state besides Khonsa and Longding, the basic idea of the project at Tawang under Capacity Building and Skill Development Training Programme for Border Area Development Project is to train, skill and provide employment and source of livelihood to educated unemployed and needy women.
Inaugurating the programme, Tawang Deputy Commissioner Sang Phuntso advised the trainees to take part in the programme diligently, skill themselves and make a career out of it.
He said it was his desire to see the project successful so that neigbouring districts of East and West Kameng can also take the benefits of the cheaper and locally machine-made product manufactured at Tawang.
Earlier, Deputy Director Industries, in-charge Gyati Kacho highlighted the salient features of the pilot-project and advised the trainees to consider the project as their own that would give them sustainable source of income.
Named the ‘Mon-Tawang Sanitary Napkin’, the product is expected to hit the markets soon in the district.
HoDs, members of Mahila Morcha, general public and trainees were present on the occasion. (DIPRO with inputs from DDI i/c)