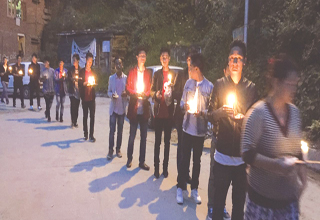 TAWANG, Sep 27: Thousands marched on the streets of Bomdila in the evening of Wednesday holding candles in their hands to express solidarity with the family members of late Toko Yame and demanded justice for the deceased.
The candle light vigil started from petrol pump to Buddha Stadium via Bazaar line.
The protestors also demanded CBI inquiry into the student’s death case and stringent punishment for the perpetrators of the crime.
West Kameng unit Students’ United Movement of All Arunachal President, Sonal Desisaw said that the case be handed over to the premier investigation agency and the culprits involved in the suspected murder case be hanged till death. He appealed to all to refrain from politicizing the issue and not to try to give it communal colour.
Further, All West Kameng Students Union General Secretary Tarun Dajangju said that justice must be delivered to the aggrieved family. He also appealed to the people of the state to refrain from spreading religious and communal hatred through social media.
Acting President of All West Kameng Students’ Union, Steven Jebel Sichisow urged the state government to initiate the handing over the case to CBI.
The candle light vigil was organized by Students’ United Movement of All Arunachal in collaboration with the All West Kameng Students’ Union, All Sajolang Students’ Union, Bharatiya Janata Yuva Morcha, West Kameng unit and Kameng Youth Organization.
Around 1000 people of West Kameng participated in it.
Meanwhile, in a letter to the Tawang Deputy Commissioner on Wednesday, the All Tawang Youth Association has demanded early arrest of the culprits involved in the murder of Toko Yame and sought an SIT inquiry into the case to bring the culprits to book at the earliest.
The Association urged the authorities to hand over the case to the CBI for further investigation if parents of late Toko Yame are not satisfied with the authority concerned.
It further demanded immediate suspension of those police personnel who were on duty on September 16 at JNV School.