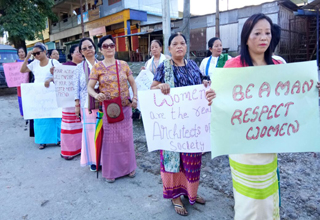 Staff Reporter
NAHARLAGUN, Oct 10: Arunachal Pradesh Women Welfare Society (APWWS) Chief Advisor, Jarjum Ete emphasized the need for the young generation to become more aware regarding issues related to women empowerment and equality for a better society.
She was addressing the district unit APWWS members and CEC members during the 38th foundation day of the APWWS at the office of the APWWS (Chief Executive Committee) here on Tuesday.
Terming the APWWS as a movement for women empowerment, Ete said that the Society since its inception in 1979 has been working for the empowerment of women in the society.
“One of the major issues which the APWWS is pushing for the state government to implement at the earliest is posting of a gynaecologist at every district hospital to ensure safe delivery of children”, she said and expressed concern over the rising number of adolescent mothers in the state.
Lomte Riba, who is one of the founding members of APWWS, spoke against domestic violence and the evil practice of polygamy.
“Women who are educated should work for the welfare of the state’s womenfolk who do not have access to education and could not fight for their rights’, added Riba.
Terming lack of education as the main hurdle preventing women from becoming aware of their rights and entitlement, Arunachal Pradesh Legal Services Authority (APSLSA) Member Secretary, Budi Habung in his address stressed the need for women NGOs like the APWWS to reach out to women living in remote areas of the state and create awareness amongst them.
Women and Child Development Deputy Director, Nyapi Ringu spoke about various state government launched schemes, like Dulari Kanya, besides central scheme ‘Beti Bachao, Beti Padhao’ and sought the APWWS’s support in spreading awareness at every district of the state.
Secretary General (APWWS) (CEC), Kani Nada Maling later highlighted the annual activity report of the APWWS.
On the occasion, prizes were also distributed to the winners of the painting competition, which was held at Banderdewa on Monday.
Earlier, members of APWWS district unit and CEC took out a rally from A-Sector to APWWS office to mark the day.
(APWWS) (CEC), Assistant General Secretary, Joram Mepung Tadar, APWWS President, Dipti Bengia Tadar, Member APWWS, Samnem Ngemu Lego, former Chairperson of Arunachal Pradesh State Commission for Women, Gumri Ringu were among those present on the occasion.
The Aalo DIPRO adds: APWWS members, officials and staff of Department of Environment & Forest, teachers and students of Government Secondary School, Pakam, PRI members, HGBs and villagers jointly celebrated the 38th foundation day of APWWS and Wildlife Week 2017.
Addressing the gathering, ACF Martha Ratan said, ‘Wildlife plays a vital role in maintaining the ecological equilibrium of nature, sustaining the food chain and have immense value and effect from medicinal, aesthetic, socio-cultural, revenue generation and pollution management point of view’.
APWWS President, Marbom Riba Bagra spoke on the importance of women empowerment, girl child welfare and ways to curb domestic violence.
ZPM, Hingam Loyi Ango, HGB, Horba Loyi, ASM, Karik Kamduk, chief auditor, APWWS, Gedam Lollen, APWWS Aalo unit General Secretary, Hoksum Ori were also present on the occasion.
Earlier, around 200 seedlings were planted in the campus of Government Secondary School, Pakam. Similar programmes were held at all district units of APWWS in the state to mark the day.