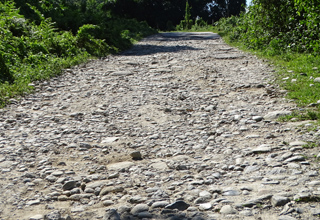 Staff Reporter
ITANAGAR, Oct 10: With the prestigious National Institute of Technology (NIT) shifting to its permanent campus at Jote, the horrific condition of the Itanagar-Jote road is in the spotlight.
Majority of NIT students who hail from various parts of the country are reportedly contemplating leaving their studies due to bad road and lack of basic amenities. Besides NIT, the state’s first government Law College at Jote is also expected to start functioning from the next academic session.
However, the pathetic condition of the stretch of road between Itanagar and Jote poses major challenges for students as well as college authorities.
The state government had sanctioned Rs 12 crore for maintenance of the said road and tender process was initiated by the PWD Doimukh in March 2017. However, the tender result has not been declared yet.
Also, Chief Minister Pema Khandu during a visit to NIT in December 2016 assured to convert Itanagar-Jote road into two lane highway, but nothing has changed at ground.
While talking to this daily, Doimukh Division PWD Executive Engineer, Nabam Tado informed that tender file is currently in the office of the PWD Commissioner and added that as soon as he gets clearance, the result will be declared.
“12 crore is for maintenance, which includes carpeting and construction of drains in some stretches. But there are four major bridges in the stretch and we have not got any fund for it. We need at least Rs 31 crore to revamp the entire stretch of road,” said the EE.
He further added that the department is not aware of any plan to construct two-lane highway as was assured by Chief Minister Pema Khandu.
A student of NIT, while talking to this daily, has appealed to the state government, particularly Chief Minister Pema Khandu, to intervene.
“Road is state subject and we hope that our CM will take some initiative. It takes around two hour to complete the 35 KM journey between Itanagar and Jote. In case of emergency medical case, students as well as public face a torrid time,” said a student of NIT.