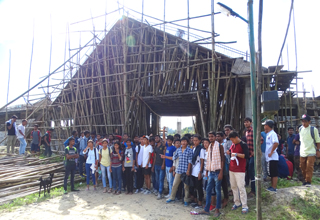 Staff Reporter
ITANAGAR, Oct 10: The indefinite protest launched by the 1st year students of National Institute of Technology (NIT), Jote entered its second day on Tuesday.
The students are demanding basic amenities in its permanent campus at Jote.
Around 147 students are sitting in front of the main gate of the institute since Monday demanding basic facilities: running water, clean and hygienic toilets, proper bus facility, establishment of regular OPD with medicines, separate hostel building, shopping complex, amusement place, mobile and internet facility and improvement of Itanagar-Jote road.
The students alleged that authorities are yet to fulfil the promises made to them.
“When our college bus tyre punctured, there was no spare tyre. It feels like we have been put into a jungle safari camp,” said a student.
The female students have also expressed concern over their safety and security. The campus lacks proper security and a police out post established earlier was damaged due to a storm and there is urgent need of a permanent out post.
“The promises made by the authority have not been fulfilled. We served three days ultimatum, which was fully ignored and we have been fooled. No faculty is taking care of us and the Registrar is yet to visit the campus to hear us out. Our parents are being warned that if we continue the protest there will be action against us. Lack of permanent Director is another problem for us.
Unfortunately, not a single representative from the state government has so far come to hear our grievances,” said a student.
Assistant Registrar of NIT, Taba Tadhe Goyang informed that shifting of NIT from temporary Yupia campus to Jote was done as per the directive of the MHRD and decision in this regard was taken at the highest body of the Board of Governor (BOG) of NIT.
The shifting was planned in August but due to pathetic road condition, heavy down pour and other issues, the shifting was delayed.
Tadhe said that authorities are working for the wellbeing of the students so that they do not face any problem in their academic activities.
He said that they have given assurance in writing to the students for resolving the demands for construction of temporary bathroom near temporary hostel within three days. Medical facilities will be provided at the earliest, while ambulance facility is available in campus with first aid facility. He also said the issue of internet and mobile connectivity has been resolved.
NIT Jote has apprised the students problems to the higher authority and it will be placed before the Board of Governing meeting, supposed to be held this month.
Meanwhile, the All Arunachal Pradesh Students’ Union (AAPSU) took serious note of the chaotic situation of NIT, Jote and visited the college to understand the ground reality.
The AAPSU expressed shock over the prevailing situation and has appealed to the authority concerned to speed up the work. The Union also convened an emergency meeting with the staff members and students to resolve the situation at the earliest.
The Union has appealed to the senior students to take necessary steps to maintain tranquillity and also take necessary steps to solve the situation. The AAPSU has assured to take up the issue for the early easing of the problems.