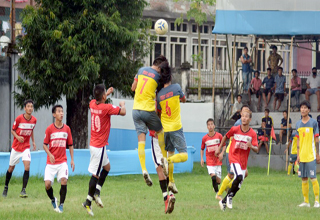 ITANAGAR, Oct 15: Capital Complex FC and Todo United FC won their respective matches against Deed Circle and Gora Makik SC in TK Arunachal Super League being held at Naharlagun Sunday.
Capital Complex won the match 3-0 without facing much resistance from their opponent.
CCFC was leading Deed Circle 2-0 at break scored by Leki Nerin and Tadar Kojum.
Though CCFC dominated most of the second half, they failed to convert the opportunities. Taba Heli netted the third goal in70th minute.
Todo United beat Gora Makik SC 1-0. Both the teams displayed some brilliant game, but it was Todo United, who had the last laugh.
The winning goal was scored by Captain Tarh Rajkumar through penalty kick which was offered in favour of Todo United during the added time.