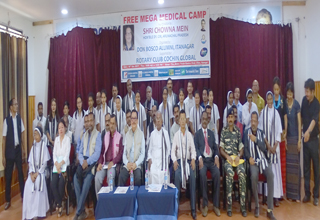 ITANAGAR, Oct 16: Don Bosco Alumni, Itanagar in collaboration with Rotary club of Cochin on Monday organised a free mega medical camp here at Don Bosco Youth Centre, Vivek Vihar which benefitted hundreds of local people of the area.
Addressing the gathering at the inauguration function Deputy Chief Minister Chowna Mein said that the Don Bosco institution have been doing their works with sincerity since its existence in state and is praise worthy. He said that alumni are active which need to be appreciated and he himself being product of the Don Bosco felt that there should be coordinated efforts to take up such social activities in different parts of state and country.
Praising the noble initiative of alumni of Don Bosco, Mein hoped that more such activities would be taken up to mitigate suffering of the humanity. He appreciated the Rotary club of Cochin for bringing in team of specialist doctors to conduct health camp here in Arunachal Pradesh.
Chief Engineer RWD Kago Tabio who is President DBA Itanagar expressed the hope that with the support of organisation like Rotary club Cochin and active alumni members of the Don Bosco, more social activities will be done for the masses.
Cochin Rotary Club Global President Paul Rajen Mampilly, DBA General Secretary Tadar Mepung Bage, DFCO Capital Complex Amit Bengia among other addressed the gathering.
CGM, IOC K K Handique, 2nd In-charge of CRPF Itanagar Anil Kumar, SP (Fire Service) Kimi Aya, Bishop of Itanagar John Thomas, Director BDYC Father Cyriac among other were present on the occasion.
A wheel chair each for Catholic Hospital Borgoan and RK Mission Hospital, Itanagar and few water filters were given away for the schools in capital complex by the President of the Cochin Rotary Club.
22 doctors from Cochin Rotary club, 12 from Catholic Hospital Borgoan and 5 members from RK Mission Hospital took part in the camp. Free medicines were distributed to the patients.