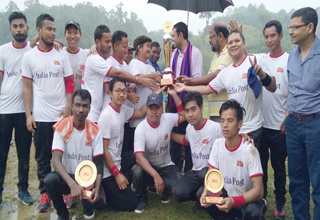 ITANAGAR, Oct 22: India Post has lifted the first Arunachal Pradesh Central Government Inter-departmental Cricket Tournament Trophy by beating BSNL in the final at Sangey Lhaden Sports Complex ground on Sunday.
Winning the toss, BSNL elected to ball first and restricted India Post to 105 in 20 overs. In reply, BSNL could only make 103 runs. Arun Pathor from India Post for his all-round performance and consistency was awarded the ‘Man of the Tournament’ and Nyaken Doke, also from India Post, was the ‘Man of the Match’.
Attending the closing ceremony of the tournament, Itanagar Capital Complex Deputy Commissioner, Prince Dhawan has said that Arunachal Pradesh is a home away from home for all the central government employees working here and such sporting activities can bring this homely feeling among them.
Three teams, Doordar-shan Kendra Itanagar, India Post and BSNL participated in the tournament.
Central Government Inter-departmental Cricket Tournament is a running trophy being played by the central government departments in Arunachal Pradesh. The organizers have said that the aim of this event is to create a platform for better understanding and mutual cooperation among all the central government employees in the state.