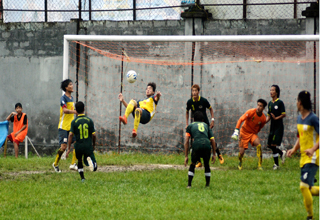 ITANAGAR, Oct 22: Deed Circle FC overcame Tagung Neri SC challenge to post a 4-3 win in the TK Arunachal Super League on Sunday.
Tapi Hakhe netted the quickest goal of the League as he took just 40 seconds to put his team (Deed Circle) in front. Tagung Neri FC equalized in 20th minute with goal from Raju Das.
The score remained tied 1-1 at break.
The second half saw fortune fluctuating from one side to another; but Deed Circle had the last laugh.
Mintu Chetry scored in 79th minute to give Tagung Neri SC the lead for a short period as it was equalized by Tang Sera a minute later (2-2). Thereafter, Tapi Hakhe scored two goals in quick succession (84th and 86th mins) thus not only completing his hat-trick but also giving his team 4-2 lead over Tagung Neri SC.
Tagung Neri SC made a last ditch effort to equalize and in the process Tabam Kodak scored a minute before the final hooter to reduce the margin to 3-4. But it was not enough for the team to force their opponent split points.
Todo United FC trounced Bamang Taji FC 4-0 in the second match of the day.
The scorers were RD Karma (2), Tagio Raja and Sonam Lepcha.
The win propelled Todo United into the semifinals along with Capital Complex.