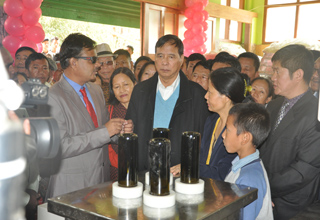 ZIRO, Oct 27: Industries and Power Minister Tamiyo Taga has launched the first Indian pure organic kiwi wine “NAARA -AABA” brewed by M/s Subu Food & Beverages at Hong village on Thursday.
Lauding the Apatanis as the most industrious tribe of the state which has excelled in all the fields, Tamiyo Taga said “the launch of the first organic kiwi wine of the country in this remote village is nothing but an innovative achievement which should be emulated by all our young entrepreneurs across the state.” Taga also showered praises on the young entrepreneurs’ couple Takhe Tamo and Tage Rita Takhe for the launch of the winery.
“This winery will be a blessing to the farmers. Restricted land holdings in this valley have limited the paddy cum fish cultivation to just household consumptions. Migrating to horticulture farming like kiwi towards the foothills of the valley will augment the economy of the people. The marketing and storage woes will be addressed by the winery,” he added.
There is no dearth of opportunities for the hardworking people the Minister said adding the government will extend facilities and support to such innovative ideas through various central schemes.
On learning about five industrial buildings lying defunct, he directed Deputy Director Industries to submit estimates for renovation. These government assets shall be allotted to entrepreneurs after renovation, he added. He also assured to take up the matter for providing a cold storage and a packaging house for the economic growth of the farming community of the valley.
Speaking on the occasion, MLA cum Parliamentary Secretary Food and Civil Supplies, Tage Taki termed the day as historic for the entire Ziro plateau . “This winery will generate employment and every single kiwi vine in the backyard will generate a steady income,” he added.
In her speech, President of the Indian Council of Child Welfare State of Arunachal Pradesh, Jarjum Ete has called for preserving the ethnic ways of tribal dinning.
Earlier, in her introductory speech, Chairman cum Managing Director of Lambu Subu Food & Beverages, Tage Rita Takhe informed that the 40,000 litre capacity winery will be able to accommodate all the kiwis grown in the entire state for a single batch. This is the second Organic kiwi winery in the world, after Switzerland. Technologies have been imported from Denmark, the best of the bottles from China to bring out one of the finest kiwi wines in the world, Rita further informed.
Later the minister also visited the kiwi orchards. Among others ZPC Hage Kobin, State protocol Officer and Secretary Youth affairs, Dani Sulu, Deputy Commissioner, Kemo Lollen, SP Bomge Kamduk, HoDs, PRI members, kiwi growers , goan buras and buris attended the launch program. DIPRO