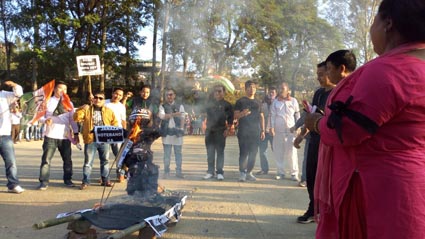 Staff Reporter
ITANAGAR, Nov 8: As the Bharatiya Janata Party (BJP) blew its own trumpet over the one-year completion of the demonetization policy launched by Prime Minister Narendra Modi on 8th November, 2016 with an ‘Anti-Black Money Day’ celebration, the Congress observed it as a ‘Black Day’ and ridiculed the BJP for celebrating an organised loot.
To mark the first anniversary of the demonetization policy of the Modi-led Government, the state BJP unit also organised an event at Ganga Market in Itanagar on Wednesday and claimed that the policy was historic and one of the boldest steps taken by Prime Minister Narendra Modi to curb black money and terror funding.
Launching a scathing attack on the Congress, Union Minister of State, Kiren Rijiju alleged that the party is “synonymous with corruption” and has “looted” the country since Independence without thinking for the people.
The Minister of State for Home Affairs also said, “The tradition of the Congress since 1947 has been to win elections through money power and after getting elected, to loot public money.”
Rijiju said “The demonetization policy of Prime Minister Narendra Modi has put a halt on corruption and the Congress leaders are spending sleepless nights since November 8 last year because of the black money they posses.”
He said that the demonetization policy of the NDA would be remembered in the history of Indian economy and the country has moved on to a much cleaner, transparent and honest financial system.
Criticizing the Congress for observing the day as ‘Black Day’, Rijiju said that the party was nervous post the demonetization and creating a drama for nothing.
“The NDA government will spare nobody engaged in corruption and soon there will be lot of action taken against them,” the Minister added.
Also advocating for the policy, state BJP President Tapir Gao said that Modi took the decision in the interest of the country and the people.
“Congress is observing the day as ‘Black Day’ because most of the black money in the country is in the possession of Congress leaders,” he alleged, adding that the demonetization has improved the economy of the country to a large extent.
However, the BJP dodged questions on the exact amount of black money retrieved by the government.
Reports of celebrating Anti-Black Money Day at East Siang district also came in, which was organised by the East Siang district BJP unit along with the Bharatiya Janata Yuva Morcha with the participation of over 300 people.
Meanwhile, the Congress has ridiculed the BJP’s claims and termed the demonetization policy as a murderous step, which led to the death of 104 people post demonetization.
Observing the one-year completion of demonetization as ‘Black Day’, the Arunachal Pradesh Congress Committee (APCC) claimed that the policy cost lakhs of workers their jobs, while small and medium scale industries were shut down and thousands of labourers, traders, farmer and businessmen suffered immensely.
AICC Secretary In-charge Arunachal Pradesh, K Jayakumar termed the demonetization as legalized loot by the Modi Government.
Terming Modi a ‘mad man’, who took idiotic and nonsensical decisions, the AICC Secretary held Modi accountable for the loss of 104 lives post demonetization.
“After demonetization, terror activities have increased and economy has drastically decreased at decimal level”, he said and accused the Reserve Bank of India Governor working as rubber stamp of Prime Minister Modi.
Addressing that event, Member of Parliament Ninong Ering accused the Prime Minister of making false promises of bringing back black money and depositing it to the bank accounts of each and every citizen.
The MP questioned, “Where is the black money? Where are the 15 lakh rupees that were supposed to be deposited to every individual’s account?”
Labeling the demonetization policy as an instrument of economic terror, APCC President Takam Sanjoy said that Prime Minister Modi wants to govern a country by intimidating common people.
He also accused the BJP of using the Income Tax Department and Enforcement Directorate as tools to terrorize the people.
Later, the APCC members paid homage to the people who lost their lives after the demonetization impact and lit candles to mark the day. A short video clip was also screened showing the impacts of demonetization on the common masses.