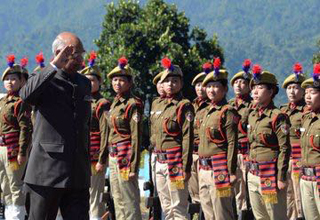 ITANAGAR, Nov 19: President of India, Ram Nath Kovind has praised the Vivekananda Kendra for commendable work in Arunachal Pradesh in the field of education. The President noted that the Vivekananda Kendra schools are a happy synthesis of traditional knowledge and values and of modern science and technology.
He was addressing the valedictory function of the completion of 40 years of the Vivekananda Kendra in Arunachal on Sunday.
Commending the services of the VKV with its motto of service to man is service to god towards promotion of quality education in the country in general and state in particular despite challenges, Kovind emphasized on maintaining its quality of education to bring about progress in the society.
The president further said that since 2001, the improved communication services in Arunachal Pradesh have changed the state’s development scenario.
The President observed that Arunachal was getting a face lift with the execution of the Trans-Arunachal Highway, road connectivity to remote interior areas, besides construction of advanced landing grounds at Pasighat, Mechukha, Ziro, Tuting and Walong, to facilitate connectivity to people living in remote areas.
Mentioning that the introduction of railway services from Itanagar to cities like Guwahati and construction of 500-bedded hospital cum Medical College at Naharlagun shows accelerated development in the state, he said that due to its huge hydro power potentials, Arunachal Pradesh can become the power house of the nation.
In his address, Arunachal Pradesh Governor Dr B D Mishra commended the Vivekananda Kendra’s mission of selfless service to society in the state in the fields of education and cleanliness, particularly in difficult areas, like Changlang, Tirap and Longding.
The Governor further stated that the presence of the President in the frontier and strategic state reinforces the sense of oneness and belongingness amongst the people of the state.
Speaking on the occasion, Chief Minister Pema Khandu also praised the services of the Vivekananda Kendra Vidyalaya in bringing educational revolution in the state through holistic approach, adding that besides working towards academic excellence, the institutions inculcate sense of nationalism and patriotism among the students.
Divulging on the initiatives of his government, Pema said that the state government is giving special emphasis on promotion of quality education in the state and informed that Arunachal Pradesh is the first small state in the country to have started smart class in schools to provide access to latest technology.
The state has been conferred with the ‘Best Performing State Award’ in Education sector under small state category by India Today Group recently in recognition to the efforts being made by the state government in the field of education, the CM said while mentioning on the decision to set up Skill Development University under PPP.
Earlier, Vice President Vivekananda Kendra Kanyakumari Balakrishnan thanked the state government for extending financial assistance of Rs 40 crore released in one single instalment for extending services of the VKV in the state.
Highlighting the activities of the Vivekananda Kendra Vidyalaya, he informed that the day also commemorates the 103rd birth anniversary of founder Eknathji and significance of the year on being the 150th birth anniversary of Sister Nivedita.
He further said that since its first establishment in the state in 1977, VKVs have produced many luminaries, technocrats and bureaucrats and other professionals in Arunachal Pradesh, adding that presently there are 36 VKV schools across the state.
Union Mos Home Kiren Rijiju, DCM Chowna Mein, Speaker T N Thongdok, Parliamentary Secretaries, Chairmen, legislators, senior government officers and officials, led by Chief Secretary Satya Gopal, besides around two thousands alumni, teachers, parents and students from all over the state attended the programme. (With inputs from DIPR)