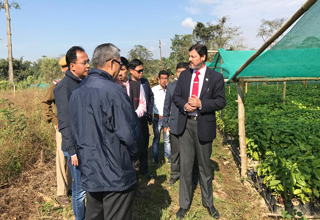 KANUBARI, Nov 27: North Eastern Council (NEC) Secretary, Ram Muivah advocated for women empowerment and self sustainable economic development during a meeting at Kanubari on Monday.
The NEC Secretary informed that NERCORMP is a non-governmental organization run by the society of NEC to uplift and transform the lives of the poor and marginalized tribal societies in North East.
He urged upon the people, especially youths to come forward for making visible changes in the society.
He informed that NERCORMP is willing to impart skill development training of their choices to youths for which they would provide financial assistance for transport, food and lodging at Guwahati.
Muivah hoped that Kanubari would soon become the business hub of Longding district under the leadership of MLA Gabriel Denwang Wangsu.
The NEC Secretary and Managing Director of NERCORMP, Dr Shailendra Chaudhari,
accompanied by a team of officials from NERCORMP, were on a visit to Tirap and Longding districts since Saturday.
MLA Wangsu apprised the NEC Secretary of the need to change the village economy through proper identification of beneficiaries and schemes that would boost the growth.
There is extreme need to examine and identify schemes which would be viable and fetch remunerative prices, he said.
The MLA also highlighted his vision and shared his policies toward sustainable economic development.
Kanubari ADC Taro Mize also spoke on the occasion.
Earlier, the team visited the Coffee Nursery at Mopakhat in Kanubari.
On Sunday, the NEC Secretary visited Senua village, a NERCORMP project village in Longding and interacted with self help groups. Earlier on the day, enroute to Longding from Khonsa, Muivah visited Old Tupi village and interacted with the SHGs and NaRMGs.
The team, which started its tour to the twin districts of Tirap and Longding from Deomali, also visited Thinsa village, a NERCORMP project village at Khonsa on Saturday and held a meeting with the SHGs. (DIPR)