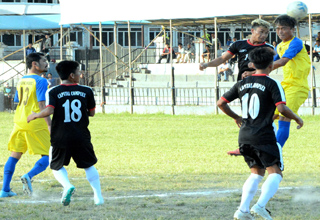 East Siang and West Siang qualify for final round

ITANAGAR, Nov 29: Zone – 5 qualifying rounds of the 16th Tadar Tang State Level Football Tournament-2017 began at Rajiv Gandhi Stadium, Naharlagun on Wednesday.
Capital Complex played against Papum Pare in the first match of the round. The match ended in a goalless draw.
Arunachal Pradesh Police will face Papum Pare at 2.30 pm on Thursday.
Kra Daadi beat Lower Subansiri 2-1 in another zonal qualifying round match being held in Ziro (zone-2).
In the other zone-2 match, Kurung Kumey trounced Upper Subansiri 7-0.
Meanwhile, East Siang and West Siang have qualified for the final round of the tournament from Zone-3, the matches of which were played in Aalo.
Other two teams of Zone-3 were Upper Siang and Siang.