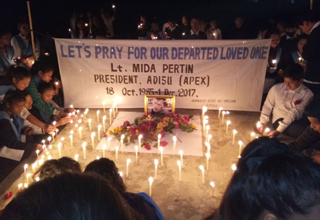 A prayer meet was held at IG Park on Wednesday, in memory of student leader Mida Pertin. It saw the participation of members of various college students and student organisations of the capital. Well-wishers, students and organisational leaders prayed forthe late student leader, and lit up candles in his memory. Similar prayer meets were also held in Pasighat, Roing, Yingkiong, Tato, and Namsai. The former student leader died in a tragic road accident on December 1 last.