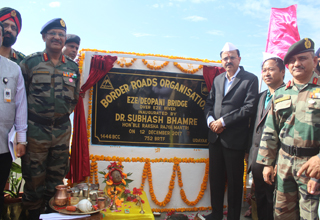 Karyir Riba
ROING, Dec 12: “Development of Arunachal Pradesh has always been a matter of top priority for the Government of India,” said Minister of State for Defence, Dr Subhash Bhamre, at the inauguration of the Eze/Deopani bridge over the Eze River here in Lower Dibang Valley (LDV) district on Tuesday.
The MoS also inaugurated the 140-mtr long Injono bridge over the Inju river, connecting Lohit and LDV districts.
Dr Bhamre said the Centre believes that the eastern and north-eastern areas of India have great aptitude to take the nation to new heights.
“Our government is focused on bringing prosperity to the people of the NE. It is now keen to develop inland waterways on the Brahmaputra River by spending thousands of crores. The government also plans to spend money on projects, including power, optical fibre network structure, roads, and railways, to ensure that the NE is connected to all parts of India,” he said.
Dr Bhamre said that the NE region has the potential to become a model for global infrastructure development, and that good connectivity in the region would also link it with the economy of South-East Asia.
Saying that the Eze bridge would now provide uninterrupted all-weather connectivity to Dibang Valley district from the rest of the country, Dr Bhamre added that besides boosting the socio-economic development of the area, the bridge would serve the country to shore up its defence requirements along the Sino-Indian border.
“This bridge will bring change in the lives of the common people,” he said, and congratulated the BRO for their work in the region.
Director General of Border Roads, Lt Gen SK Shrivastava, spoke about the hurdles faced by the BRO while laying the bridge, such as flash floods, difficulty in sinking the well foundation in the river’s bed, and the abandoning of the work by the contractor in 2008.
“We work in the most inhospitable and difficult areas, during which a number of our boys have sacrificed their lives for the nation. Since the formation of the BRO in 1960, we have succeeded in creating a road network of approximately 51,000 kms and 518 permanent bridges of 4000 mtrs length, connecting even the most far-flung areas with the rest of the country,” he informed.
The completion of the Eze bridge has come as a boon for the people of the area, especially those of Dibang Valley district, as the district remained cut off from the rest of the country during the monsoons each year.
The history of the bridge goes back to 1981 – a Bailey bridge then installed collapsed in 1988. In 1990, it was reconstructed, but collapsed again in 1995 due to a silting pier. A Bailey suspension bridge was again installed in 1995, but was not viable due to the ferocity of the Eze River.
The last firm to attempt to construct the bridge abandoned work in 2008, leaving little hope for the people.
However, the BRO under its Project Udayak undertook the construction work in 2015, and boasts of having laid the bridge two months prior to its scheduled completion date.
Also present at the inaugural programme were Project Udayak CE, Brigadier Rakshvir, 3Core GOC Lt Gen Anil Chauhan, 752 BRTF Commander Dr M Kishore Kumar, LDV SP Sanjay Kumar Sain, DC in-charge Chesta Yadav, and other officers and staff of the BRO.