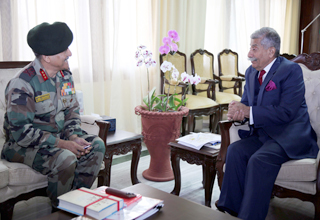 ITANAGAR, Dec 16: General Officer Commanding of the Dimapur (Nagaland)-based 3 Corps, Lt GenAnil Chauhan, on Saturday called on Governor of Arunachal Pradesh, Dr BD Mishra, at Raj Bhavan and discussed security-related issues along the Sino-India border in the eastern part of the state.
They also held discussions on various welfare activities being carried out from time to time by the Indian Army for the people living in the border areas.
The governor expressed appreciation for the loyal services rendered by the troops of the 3 Corps in the state, and urged the GOC to continue the welfare activities.
“Such initiatives of the armed forces will instil a sense of security among the locals and integrate the border villages with the people of other parts of the country,” said the governor.
The governor, who met the 4 Corps GOC a couple of days ago, expressed his confidence in the security apparatus, and said he is happy about the initiatives of the Army to maintain peace and tranquillity in the region.
The GOC assured the governor that the armed forces would defend every inch of the country and are reaching out to the people and maintaining cordial relationship with them through awareness campaigns, health camps, and educational initiatives. (PRO to Governor)