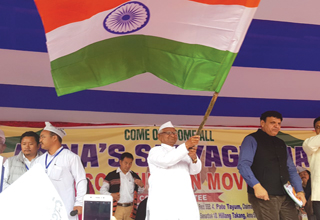 Staff Reporter
ITANAGAR, Dec 16: Noted social worker Anna Hazare has criticised the government of Arunachal Pradesh for ignoring the issue of former chief minister Kalikho Pul’s death.
Addressing a gathering of supporters and like-minded people against corruption at Indira Gandhi Park here on Saturday, the 80-year-old social activist termed Pul’s death a “murder” and said that the government should initiate proper investigation to unearth the truth behind his death.
Hazare also said he would take up the issue of Pul’s death in all his future rallies and movements till justice was served. He said the issue would be one of the topics in the agenda of the mass movement against corruption, scheduled to be held on 23 March next year at Ram Leela Maidan in Delhi.
Hazare also called out Prime Minister Narendra Modi on the hollow assurances he made to the nation.
Advocating implementation of the Lokpal Bill, the veteran soldier said that when Modi was the chief minister of Gujarat, the then governor had pressed for passing the Lokpal Bill, but, Hazare said, “It was Modi who fought against its implementation in the High Court and the Supreme Court.”
“We expected much from Modi, but he has failed to deliver on his promises,” said Hazare, and questioned Modi on the promise he had made to the people of the country that each citizen would have Rs 15 lakhs in their account.
Hazare called upon the youth of the state to rise to the occasion and fight against all forms of corruption, as well as seek justice for former chief minister Kalikho Pul.
An ardent supporter of Hazare, Colonel Dinesh Nain said that the corrupt people at the helm of affairs were afraid of educated people, which is one of the reasons why, he said, the salaries of teachers are not disbursed on time.
“An educated youth scares them because education teaches us to question things; to questions things that are wrong,” he said, and called for educating the youth as much as possible, and to fight the injustice against teachers, “who are the makers of the nation.”
Organising Committee Chairman Serpi Flago briefed the gathering on the movement scheduled for March next year, and invited the youths of the state to join them.