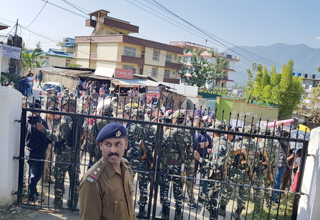 [ Nellie N Manpoong ]
ITANAGAR, Dec 19: Several candidates of the APPSCC Preliminary Examination-2017 held a peaceful protest march against the Arunachal Pradesh Public Service Commission on Tuesday.
The group marched from the IG Park tennis court to the commission’s office, and met with APPSC members with a new memorandum.
One of the members of the steering committee informed this daily that during the meeting, they placed the demand that the commission reveal the names of those responsible for setting the question papers. The steering committee member said the commission in response claimed that the papers had been set by a firm and not by officials of the APPSC.
“The commission claimed that the task of setting the question paper was outsourced to a firm and assured to break ties with the firm.
However, the commission claimed that it could not reveal its name or other firms would blacklist the APPSC in all future projects,” the committee member said, and expressed apprehension over the statement made by the commission members.
Also questioning the commission’s appeal to the state government on 18 December to introduce the Civil Services Aptitude Test (CSAT) format, the candidates said there is no clarity on when the government would pass the order, and that they have spent months preparing for their optional papers.
“It could take months or even over a year for the government to decide on its introduction. The candidates have spent a lot of money on coaching and months to prepare for their optional subjects. It would be unfair at such a crucial juncture,” the member said.
The candidates appealed to the commission to introduce the CSAT format from the next time onward, instead of introducing it in haste in the current examination.
The commission on its part asked the candidates to submit the appeal in writing, so that the commission could consider it.
“The candidates have given it in writing that they want the CSAT format to be held from the next time instead of the current examination, and we are hopeful,” said the steering committee member.
Speaking to this daily, APPSC Chairman Tajom Taloh said that the commission would look into the memorandum and examine the points before taking any action. He refrained from making further comments.
Other demands of the candidates include setting up an independent inquiry committee within a week to find the root cause of the chaos; stern disciplinary action against erring officials or agencies; a yearly calendar for all examinations; fresh examinations within the next four to five months, with prior notification of at least two months; proper moderation and scaling of question papers; deputation of trained and expert invigilators, so that there is strict prohibition of mobile phone usage inside the examination halls; and restriction on double-seating arrangements.