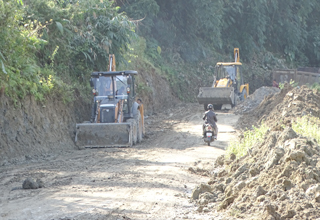 Staff Reporter
ITANAGAR, Dec 19: The much delayed repairing and re-carpeting work on the Itanagar-Jote road finally started on Friday.
The pathetic condition of the road has made life miserable for the people of Sangdupota circle. The students of NIT (Jote), along with villagers of Poma and Jote, and visitors to Gyeker Sinyi are the worst sufferers.
The state government had released Rs 12 crore for constructing the road, but the tender process was delayed due to reasons best known to the Doimukh PWD. The start of work has now given hope to the users of the road.
“We are very happy to see the work in full swing. We appeal to the PWD and the contractor not to compromise with quality and make the best use of the money. After waiting for more than five years the construction of the Itanagar-Jote road is being undertaken,” said a resident of the area.
Urban Development Minister Nabam Rebia, who is also the local MLA, informed that completion of the road would not only improve road connectivity to Sangdupota circle but also provide an alternative connectivity to East Kameng district.
He dismissed allegation of political interference in the tender process. Rebia meanwhile expressed appreciation for the youths “for realizing their mistake and supporting the road project.”
He said, however, that the fund for this year is not sufficient for completing the road all the way from Itanagar to Jote, “as there are a few bridges over Gira and Poma rivers which have not been included.”
He assured to try and look for additional fund to complete the bridge work.
Rebia appealed to the people of the locality to support the work agency in completing the road on time.
Meanwhile, United Sangdupota Intellectual Forum Chairman, Teli Tadap, said they have come to a mutual understanding with the work agency and are supporting the construction work “in the greater interest of the development of the area.”