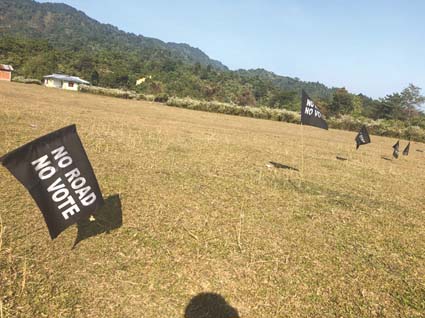 LIKABALI, Dec 21: As the Likabali assembly constituency went to by-election on Thursday, five villages under Kangku circle boycotted the polling with their ‘No Road, No Vote’ campaign.
The polling booths were identified as Kangku secondary school, Balisori, Ngopi, Upper Borajan, and Kamcham.
The total number of eligible voters at these five polling booths stands at 1260, out of which the Kangku polling station has 428 voters, the highest among the five.
Out of the nine polling stations in the circle, polling was held at four polling stations – Durpai, Torajan, Sogum Mingmang, and Richerite (which has only 24 voters on the electoral roll).
“Since morning no voter has turned up, though they are gathering nearby,” said Menga Angu, 1st Polling Officer of the Kanku secondary school polling station.
Shouting the slogan ‘Road jima rem, vote jima re (No road, no vote),’ the campaigners, under the aegis of the No Road, No Vote Committee, peacefully gathered near the polling booths with black flags and banners.
The protestors prohibited any political party or leader from entering the polling areas.
“So far no written assurance has come from the government, nor from any representative; that is why we are going ahead with the boycott,” said Jumnya Tao, a ‘No Road No Vote’ campaigner at Kangku village, adding that abstaining from the electoral process was the only way to send a clear message to the government.
“It’s been four decades that we are being deprived of basic development like road communication. Many great leaders including Tomo Riba and Jomde Kena represented our constituency since 1978, but no one paid heed to our demand for a road,” said Daju Ngomle, a ‘No Road No Vote’ campaigner at Balisori village.
Earlier, it was reported that the Torajan polling station was also boycotting the poll. However, it joined the polling after a government driver cast his vote without being noticed by the campaigners who were guarding the polling booths.
Kangku circle is about 40 kilometres away (via Assam) from Likabali, the temporary headquarters of Lower Siang district. The distance would reduce to 27 kilometres if the proposed road is built through the foothills of Arunachal.
A district electoral office source informed that the electronic voting machine (EVM) at the Siberite primary school was allegedly damaged by voters, and that the EVM at the Dibe polling station malfunctioned. Re-polling at these polling stations will take place on Saturday.
Meanwhile, the Election Commission (EC) has said that the by-polls to the Pakke-Kessang and the Likabali assembly constituencies were by and large peaceful.
The EC said that Pakke-Kessang recorded an 86% turnout while reports from Likabali are awaited. The EC, based on initial reports, put the turnout at 51% in the constituency.
In Pakke-Kessang, it is a straight contest between former deputy chief minister Kameng Dolo, who is contesting on a Congress ticket, and BJP nominee BR Waghe, while the Likabali constituency is witnessing a multi-cornered contest with four candidates in the fray. They are Kardo Nyigyor (BJP), Modam Dini (Congress), Gumke Riba of the Peoples Party of Arunachal, and Independent candidate Sengo Taipodia.
The Likabali seat had fallen vacant after the state health and family welfare minister Jomde Kena passed away on 4 September this year.
The Pakke-Kessang seat fell vacant after the Gauhati High Court declared null and void the election of Dolo in the 2014 polls following an election petition filed against him by BJP nominee and former minister Atum Welly.