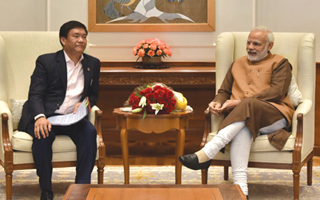 NEW DELHI, Dec 23: Arunachal Pradesh Chief Minister Pema Khandu called on Prime Minister Narendra Modi at the latter’s Lok Kalyan Marg residence office here on Saturday.
Pema, who was accompanied by Union Minister of State for Home Affairs, Kiren Rijiju, DyCM Chowna Mein, and State BJP President Tapir Gao, discussed with the prime minister matters related to the progress and development of Arunachal Pradesh.
He apprised the PM of the initiatives taken by his government to improve governance, and its endeavour to put in place a mechanism for accountable and efficient delivery of services to the citizens.
Expressing gratitude to the Centre for acknowledging the absence of connectivity in the region and supporting the state, the chief minister informed that the Trans-Arunachal Highway (TAH) project, which will see an investment of over Rs 50,000 crore over the next three years, “is a huge step in bridging the connectivity deficit.”
He also expressed gratefulness to Government of India for appreciating the need to create robust infrastructure in the border villages, and said a comprehensive package is being prepared for addressing the critical infrastructure gaps.
“A proposal for construction of a frontier highway is also under active consideration under the Home Affairs ministry, and I hope that it will be launched soon,” Pema said, adding that the East-West Industrial Corridor in the foothills would usher in a surge of economic activity.
“The survey for preparation of a DPR is under way and will be submitted for funds,” the CM informed, and requested Modi to direct the ministry concerned to expedite the matter.
Khandu also thanked the union government for announcing new rail links in the state, which will provide regular rail connectivity, apart from reliable and affordable travel for the poor.
Reiterating his request for a Greenfield airport at Itanagar, Pema sought Modi’s personal support in early commencement of construction work for the civil airport in Hollongi, for which technical surveys have already been carried out by the Civil Aviation ministry.
He also sought resources for creating infrastructure for administrative centres, including transmission lines, social infrastructure of health and education, explaining that the existing assets have outlived their utility.
He also requested the Centre to “positively look forward” to a comprehensive water supply plan for which the state government willl submit a DPR for funding.
The CM reiterated the request made earlier for releasing the remaining grant of Rs 1060 crore for several centrally-sponsored schemes which have been de-linked.
Justifying his stand, Pema said that several crucial schemes under the SPA, Product Infrastructure Development for Destinations and Circuits, JNNURM, etc, have remain unfinished.
“One-time grant to these unfinished projects would be of a great relief to the state,” he said.
The CM also requested Modi to consider establishing a cantonment in Itanagar, as assured by the home minister.
“We are grateful that the smart city project for Pasighat has been approved and Itanagar also has been short-listed under the scheme. However, we need to revisit the modalities of implementation and have a 90:10 sharing between the Centre and the state, as is the case for other centrally-sponsored schemes,” Pema said.
The prime minister on his part assured all-out support to Arunachal Pradesh. On a request from the delegation, he assured to visit the state in January.