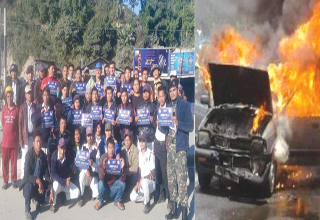 ITANAGAR, Dec 29: The 12-hour bandh announced by the Abo Tani Clan Organisation (ATCO) was ineffective in the capital region.
Offices and educational institutions functioned normally, while markets were open, with a few exceptions, and vehicular movement was at its normal traffic by 9 am. The post offices also functioned as usual.
There were two reports of burning of vehicles by enforcers of the bandh. Reportedly, a car was set on fire. It could not be ascertained who the car belonged to.
Capital Complex Deputy Commissioner Prince Dhawan said that two committees have been formed under the chairmanship of the EACs of Itanagar and Naharlagun to assess minor damages and to recover the compensation from the bandh callers.
The capital administration had earlier cracked down on the bandh callers and arrested six persons, while the government had declared the bandh illegal.
Executive members of the ATCO – Yura Tachik and Sangi Gyadi – along with five active members of the organisation were booked under Section 3 of the Arunachal Pradesh Unlawful Activities Prevention Act. Many other activists of the ATCO were also arrested.
“In a joint endeavour by the district administration and the police, the bandh call today was neutralized with the help of all the stakeholders including the Itanagar Market Welfare Association, and Bazaar Welfare Committees of Naharlagun, Nirjuli and Banderdewa, transport federations, the vendors and hawkers association, the traders of Itanagar and Naharlagun, the Capital Complex Commercial Building Owners Association, etc, and most importantly the contribution of the citizens in defying the bandh call,” the DC said.
He informed that magistrates carried out regular patrolling to ensure that the city did not witness the bandh culture again.
“The denizens of the capital city and the state are fed up of this bandh culture and they shall not allow the city life to be taken to ransom by miscreants. The city has fought back and it’s a victory of democracy and the people of the city and the state,” the DC said.
He said the administration would deal strictly with bandh callers in future also.
Meanwhile, the administration’s online signature campaign to vote against bandhs has been a huge success. (With DIPRO input)